With Joy We Meditate the Grace 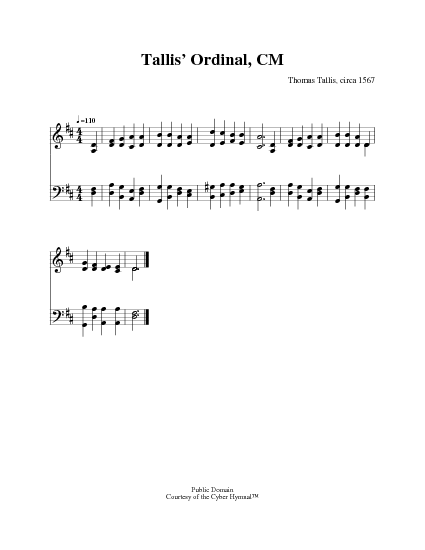 With joy we meditate the grace

1 With joy we meditate the grace
of our High Priest above;
his heart is made of tenderness,
and ever yearns with love.

2 Touched with a sympathy within,
he knows our feeble frame;
he knows what sore temptations mean
for he has felt the same.

3 He in the days of feeble flesh
poured out his cries and tears;
and, in his measure, feels afresh
what every member bears.

4 He'll never quench the smoking flax,
but raise it to a flame;
the bruisèd reed he never breaks,
nor scorns the meanest name.

5 Then let our humble faith address
his mercy and his power:
we shall obtain delivering grace
in every needful hour.

Source: Ancient and Modern: hymns and songs for refreshing worship #824

With joy we meditate the grace. I. Watts. [Our High Priest.] Published in his Hymns and Spiritual Songs, 1709, Bk. i., No. 125, in 6 stanzas of 4 lines. J. Wesley included it with the omission of stanza iii. in his Charlestown Psalms & Hymns, 1736-7, and again in the Psalms & Hymns, 1743. From the latter it passed into G. Whitefield's Collection of Hymns, 1759, M. Madan's Psalms & Hymns, 1760, and others. This text, with slight alterations, was given in the Wesleyan Hymn Book, 1875. Another text, found mostly in the Church of England collections, is from Toplady's Psalms and Hymns, 1776, with additional alterations of a later date, the principal sources of which are Stowell, 1831; Bickersteth, 1833, and Elliott, 1835. In common with many of Watts's longer hymns, most forms of the text are abbreviated, and the number and arrangement of stanzas vary considerably. These can be tested by any modern edition of the Hymns & Spiritual Songs. In Harland's Church Psalter & Hymnal, 1876, it begins, "With joy we celebrate the grace"; and in the Down and Connor Hymn Book, 1863,"With joy we contemplate the grace."

Another form of this hymn was given in the 1745 Draft of the Scottish Translations and Paraphrases, No. 8. This began, "Jesus, the Lord, Who once on earth," and was composed of stanzas i., ii., new, and the rest from Watts, stanzas i.-iv. and vi., with stanza i. l.1. 1, 2, altered. In the 1751 revised edition of the Draft it was slightly altered, and there began, "Jesus, the Son of God, Who once." Stanza vii. was also rewritten as stanza vii., viii. These alterations have been ascribed to Hugh Blair. The 1751 text was given in the authorized issue of the Translations and Paraphrases, 1781, with stanzas v., vii., viii. rewritten. In the markings by the eldest daughter of W Cameron, the 1781 alterations are ascribed to him. In Miss Jane E. Leeson's Paraphrases & Hymns, 1853, the text is reduced to 4 stanzas, and begins with stanza iii., "To human weakness not severe." [Rev. James Mearns, M.A.]

All tunes published with 'With Joy We Meditate the Grace'^ top 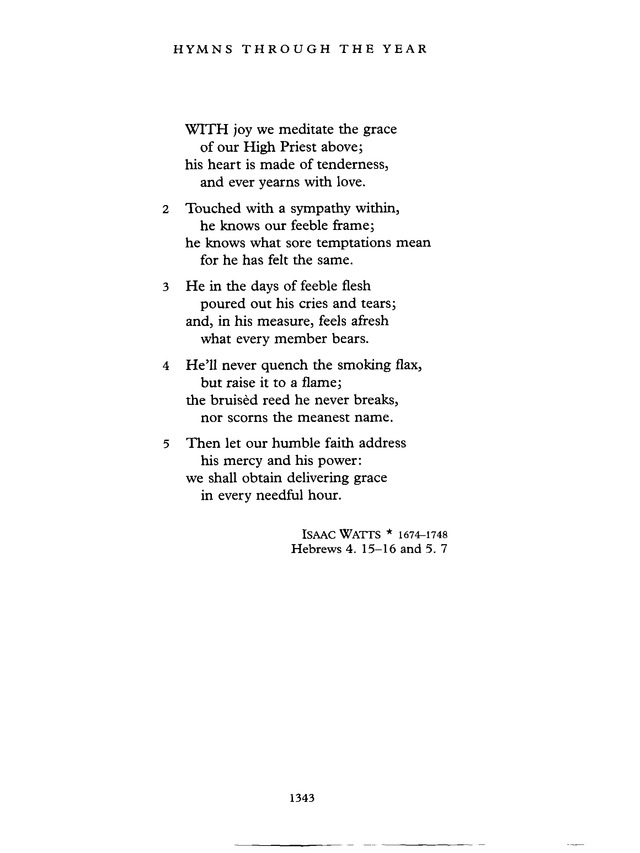