Ye nations all, on you I call

Ye nations all, on you I call

Tune: THE BABE OF BETHLEHEM
Published in 15 hymnals

1 To Abraham the promise came,
And to his seed for ever,
A light to shine in Isaac's line,
By scripture we discover;
Hail, promised morn! the Savior's born,
he glorious Mediator—
God's blessed Word made flesh and blood,
Assumed the human nature.


2 His parents poor in earthly store,
To entertain the stranger
They found no bed to lay his head,
But in the ox's manger:
No royal things, as used by kings,
Were seen by those that found him,
But in the hay the stranger lay,
With swaddling bands around him.


3 On the same night a glorious light
To shepherds there appeared,
Bright angels came in shining flame,
They saw and greatly feared.
The angels said, "Be not afraid,
Although we much alarm you,
We do appear good news to bear,
As now we will inform you.


4 "The city's name is Bethlehem,
In which God hath appointed,
This glorious morn a Savior's born,
For him God hath anointed;
By this you'll know, if you will go,
To see this little stranger,
His lovely charms in Mary's arms,
Both lying in a manger."


5 When this was said, straightway was made
A glorious sound from heaven:
Each flaming tongue an anthem sung,
"To men a Savior's given,
In Jesus' name, the glorious theme,
We elevate our voices,
At Jesus' birth be peace on earth,
Meanwhile all heaven rejoices."


7.
Then with delight they took their flight, and winged their way to glory,
The shepherds gazed and were amazed, to hear the pleasing story;
To Bethlehem they quickly came, the glorious news to carry,
And in the stall they found them all, Joseph, the Babe, and Mary.


8.
The shepherds then returned again to their own habitation,
With joy of heart they did depart, now they have found salvation.
Glory, they cry, to God on high, who sent his Son to save us
This glorious morn the Savior's born, his name it is Christ Jesus.

Source: The Worshipbook: Services and Hymns #608

THE BABE OF BETHLEHEM

All tunes published with 'Ye nations all, on you I call'^ top 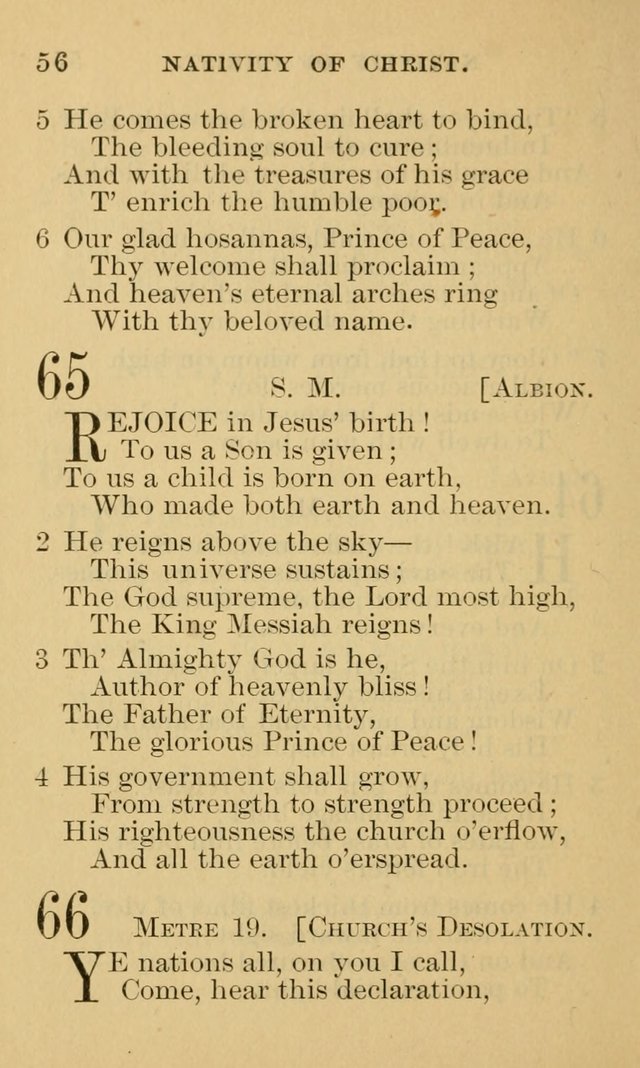 View Page
A Collection of Psalms and Hymns: suited to the various occasions of public worship and private devotion (1884), p.56
^ top

Display Title: The Babe of Bethlehem First Line: Ye nations all on you I call Tune Title: THE BABE OF BETHLEHEM Date: 2009 Source: Southern Harmony
An American Christmas Harp #78
Include 14 pre-1979 instances
All instances^ top
Suggestions or corrections? Contact us