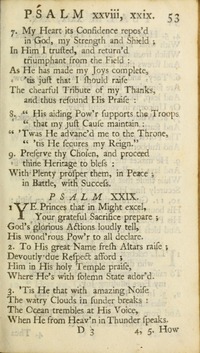 Tune: [Sure wicked fools, devoid of shame]
Published in 9 hymnals


2 To his great name fresh altars raise;
Devoutly due respect afford;
Him in his holy temple praise,
Where he's with solemn state ador'd.


3 'Tis he that with amazing noise
The wat'ry clouds in sunder breaks:
The ocean trembles at his voice,
When he from heav'n in thunder speaks.


4 How full of pow'r his voice appears!
With what majestick terror crown'd!
Which from the roots tall cedars tears,
And strews their scatter'd branches round.


5 They, and the hills on which they grow,
Are sometimes hurried far away;
And leap like hinds that bounding go,
Or unicorns in youthful play.


6 When God in thunder loudly speaks,
And scatter'd flames of lightning sends,
The forest nods, the desart quakes,
And stubborn Kadesh lowly bends.


7 He makes the hinds to cast their young,
And lays the beasts dark coverts bare;
While those that to his courts belong,
Securely sing his praises there.


8 The Lord sits sov'reign on the flood,
The thund'rer reigns for ever king;
But makes his church his blest abode,
Where we his awful glories sing.


9 In gentler language, there the Lord
The council of his grace imparts;
Amidst the raging storm, his word
Speaks peace and courage to our hearts.

Source: The Psalms of David: with hymns and spiritual songs: also, the catechism, confession of faith, and liturgy of the Reformed Church in the Netherlands #29

[Sure wicked fools, devoid of shame]

All tunes published with 'Ye princes that in might excel'^ top 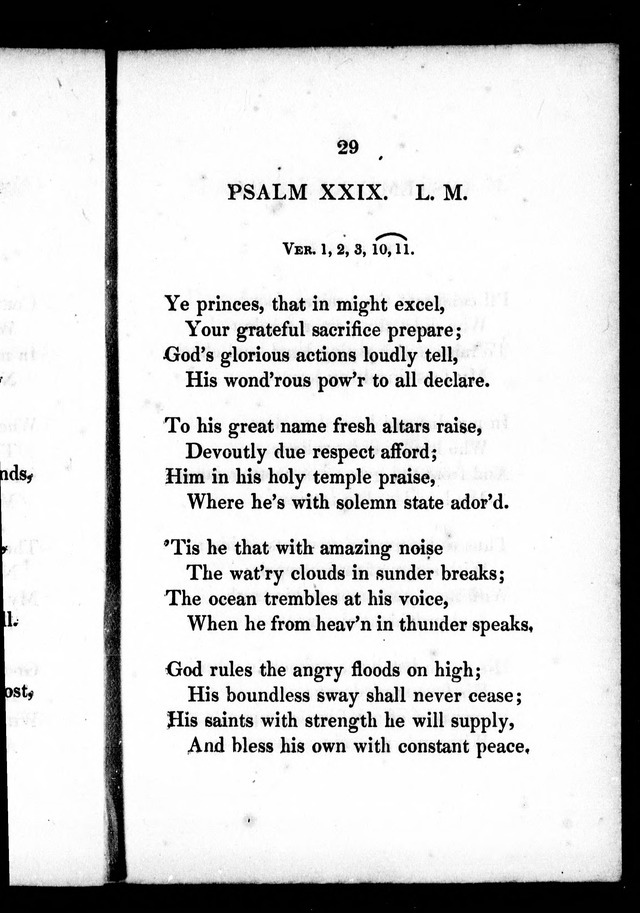 View Page
A Selection of Psalms, Hymns and Anthems, for every Sunday and principal festival throughout the year. for the use of congregations in the dioceses Quebec and Toronto. (1842), p.23
^ top

A Collection of Psalms and Hymns #18

A New Version of the Psalms of David #XXIX

A New Version of the Psalms of David #53

A Selection of Psalms and Hymns for Every Sunday ... Diocese of Quebec #d191

A Selection of Psalms and Hymns #70a

A Selection of Psalms, Hymns and Anthems, for every Sunday and principal festival throughout the year. for the use of congregations in the dioceses Quebec and Toronto. #P29

The Psalms of David #XXIX

The Whole Book of Psalms #XXIX