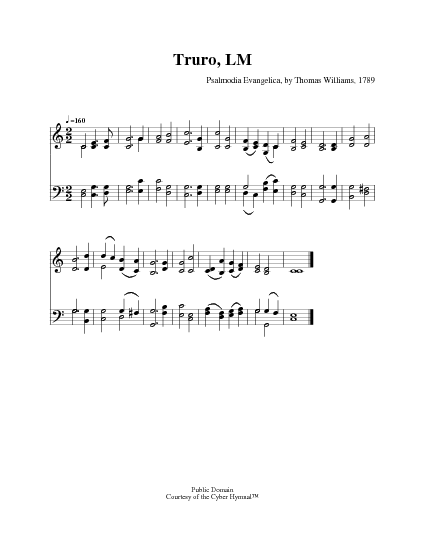 Yes, [Our] God is good, in earth and sky

1 Yes, God is good: in earth and sky,
From ocean's depths and spreading wood,
Ten thousand voices seem to cry,
God made us all, and God is good.


2 The sun that keeps his trackless way,
And downward pours his golden flood,
Night's sparkling hosts, all seem to say,
In accents clear, that God is good.


3 The merry birds prolong the strain,
Their song with ev'ry spring renewed;
And balmy air, and falling rain,
Each softly whispers, God is good.


4 Yes, God is good, all nature says,
By God's own hand with speech endued;
And man, in louder notes of praise,
Should sing for joy that God is good.


5 For all Thy gifts we bless Thee, Lord,
But chiefly for our heavenly food;
Thy pard'ning grace, Thy quick'ning word,
These prompt our song that God is good.

Source: Voices of Praise: for school and church and home #275

Gurney, John Hampden, M.A., eldest son of Sir John Gurney, a Baron of the Exchequer, was born in Serjeants’ Inn, London, Aug. 15, 1802, and educated at Trinity College, Cambridge, where he graduated in 1824. On taking Holy Orders he became Curate of Lutterworth (1827-1844), and subsequently Rector of St. Mary's, Marylebone, and Prebendary of St. Paul's Cathedral. He died in London, March 8, 1862. The Society for Promoting Christian Knowledge and other religious societies had his cordial sympathy, and received his active support. His publications include several small volumes in prose, and the following:— (1) Church Psalmody; Hints for the improvement of a Collection of Hymns published by the Society for Promoting Christian Knowledge, 1… Go to person page >
^ top

Yes, God is good! in earth and sky. [Goodness of God in nature; or, Flower Services.] The history of this popular hymn is somewhat curious and intricate. It is of American origin and came into modern hymn-books in the following manner:—
1. The original hymn appeared in Hymns for Children, Boston, U.S.A., 1825, in 6 stanzas of 4 lines, the opening stanza reading:—

"God is good! each perfumed'flower,
The smiling fields, the dark green wood,
The insect fluttering for an hour;
All things proclaim that God is good!"

The editor of this collection is not named. Possibly it may have been Mrs. Follen, the writer of the hymn. The false metre of the opening line (7's instead of 8's) was probably a misprint. In several instances this line has been republished, notwithstanding the clearness of the error.
2. In Emily Taylor's Sabbath Recreations, Wellington, Salop,1826, p. 203, this text was given as an original piece never before published, and signed "E. L. C," the initials of Mrs. Follen's maiden name. Possibly it was sent in manuscript to Miss Taylor, before it was printed in the Boston Hymns for Children.
3. In J. R. Beard's English Unitarian Collection of Hymns, 1837, it is included as "Yes, God is good! each perfumed flower."
4. The Boston Hymns for Children, or more probably a little undated work called Gems of American Poetry, fell into the hands of J. H. Gurney whilst engaged in compiling his Lutterworth Collection of Hymns for Public Worship. In that Collection in 1838, No. 299, appeared Gurney's version of the hymn as follows:—stanza i., Mrs. Follen, "Yes, God is good! each perfumed flower;" stanzas ii., iii., new; stanza iv., lines 1, 2, Mrs. Follen, 11. 3, 4, new; stanza v., new.
5. The Psalms & Hymns for Public Worship, Selection for some of the Churches in Marylebone, was published by Gurney and others, in 1851. No. 300 is Gurney's final revision of the hymn. Of this text st. i., by Gurney, reads:—

"Yes, God is Good,—in earth and sky,
From ocean-depths and spreading wood,
Ten thousand voices seem to cry,
‘God made us all, and God is good.'"

The remaining stanzas are:—stanzas ii.-v., repeated from the Lutterworth Collection as above, and st. vi. is new. To this hymn and another ("We saw Thee not when Thou didst come ") Gurney added the following note in the Index of first lines:—

"This hymn ['We saw Thee not’, &c], and the last hymn in the book, ‘Yes, God is good,' were suggested by two poems in a small American volume, which were well conceived, but very imperfectly executed. Successive alterations have left nothing of the original compositions remaining but the first four words, and the repeated words in each hymn. With this acknowledgment, the writer has not scrupled to put his name to them—J. H. G."

All tunes published with 'Yes, God Is Good'^ top 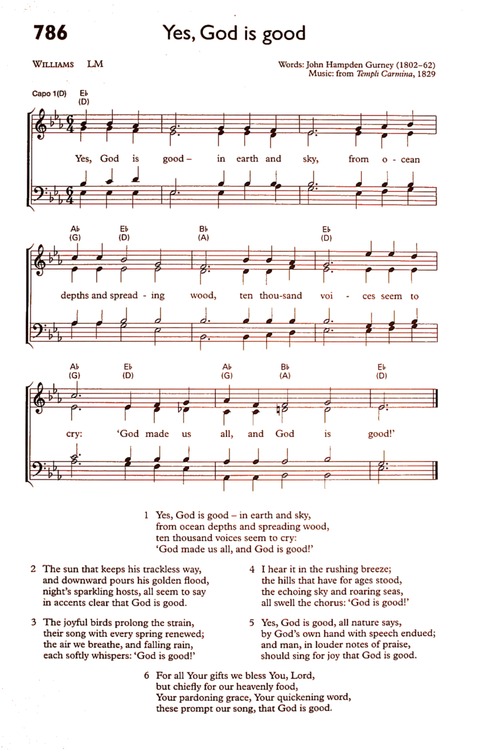