Dachstein, Wolfgang, was, prior to the Reformation, a monk at Strassburg, and organist of the Cathedral. In 1524 he espoused the cause of the Reformation, and in 1525 was appointed organist and assistant preacher at St. Thomas's Church, which offices he held till at least 1530 (Koch, ii. 103-104).Along with his friend M. Greitter (q.v.) he edited the first Strassburg Hymnbook, the Kirchen ampt, published in 1525. Two of his Psalm versions have been translated into English, but he is best known as author of the melody which is set to the first of these.    i. An Wasserflüssen Babylon. [Ps. cxxxvii.] 1st pub. 1525, pt. iii, as above, and thence in Wackernage, iii. p. 98, in 5 st. of 10 1. The translations, almost identical, are : (1)… Go to person page >
^ top

A Lamb Goes Uncomplaining Forth

All texts published with AN WASSERFLÜSSEN BABYLON^ top

The tune AN WASSERFLÜSSEN BABYLON was composed by Wolfgang Dachstein (b. Gffenburg an der Kinzig, Germany, 1487; d. Strasbourg, Germany, 1553) and published in the Strassburger Kirchenampt (1525), edited by Dachstein and his friend Matthaus Greiter. In that collection it was the setting for Dachstein's German versification of Psalm 137, from which the tune name derives (in English, "By the rivers of Babylon"). The tune is similar in character to Genevan psalm tunes that were published slightly later, and it has always been associated with the Song of Zechariah in the Genevan psalm-singing tradition, which did permit the singing of the Lukan canticles. In bar form (AAB) with a long and complex B section, AN WASSERFLÜSSEN BABYLON is a challenging tune for congregations, but well loved by those who were nurtured in the Genevan tradition. The melisma in the final phrase effectively produces a strong ending.

Dachstein came from a long line of theologians and musicians originally from the town of Dachstein near Strasbourg. In 1503 he studied theology in Erfurt (Martin Luther was in that city in 1503 as well) and became a Dominican monk. He was an organist at both the Cathedral and the St. Thomas Church in Strasbourg and lived there at the same time as John Calvin, who was working on the Genevan Psalter. Converted to Protestantism in 1523, he became the assistant pastor at St. Thomas Church but later returned to Roman Catholicism to retain his position as organist at the Cathedral. Dachstein and Matthaus Greiter co-edited the Teutsch Kirchenamt mit Lobgesengen (1525), one of the earliest Lutheran prayer and hymnbooks.

Text: A Lamb Goes Uncomplaining forth 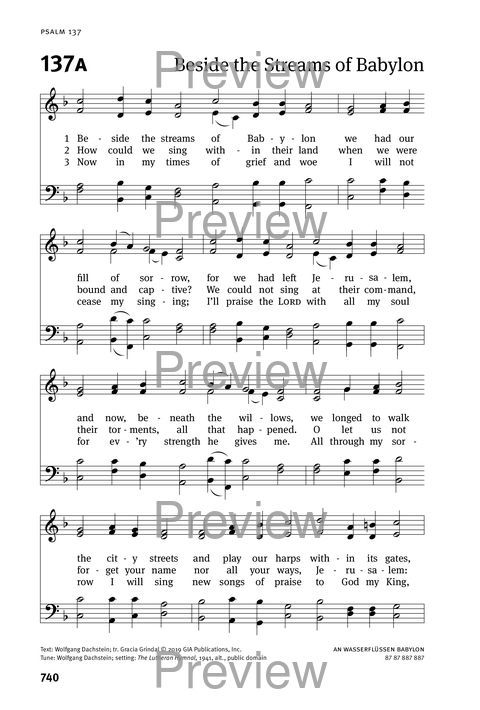