Christ, You Are the Fullness

“Abba, Abba, hear us,” we cry;
God’s Spirit cries in us
and proclaims us slaves no more, but heirs,
the heirs of God.
All creation waits, eager and longing;
soon God’s children, glorious and free, will be
revealed.

God, who made the earth, declared it good in the beginning

All texts published with ARIRANG^ top

The tune ARIRANG is named after a Korean folk song that has long been a favorite in Korea and became known by many American soldiers during the Korean War (1950¬1953). The song was probably composed around 1865, when laborers were conscripted from allover Korea to rebuild the Kyonbok Palace in Seoul. These workers brought their regional folk songs with them; this one presumably came from the legendary Arirang mountains, which in Korean culture symbolize the sometimes bitter separation of loved ones. Arirang is a lament with romantic connotations; the original text can be translated:

As the stars, my tears are countless
as they ceaselessly flow!
You, so faithless, are leaving me alone and pale.
May your feet pain you at the end of the trail!

ARIRANG is a fascinating tune featuring repeats of complete phrases and small motifs. Polman changed one of the original cadence patterns to make four clear phrases for this song, which is intended for unison singing. The 1986 keyboard harmonization by Dale Grotenhuis (PHH 4) features a drone (held note) in the bass, a device common in much Asian music. Because of the irregular number of syllables in each stanza, have a soloist or choir introduce it to the congregation. 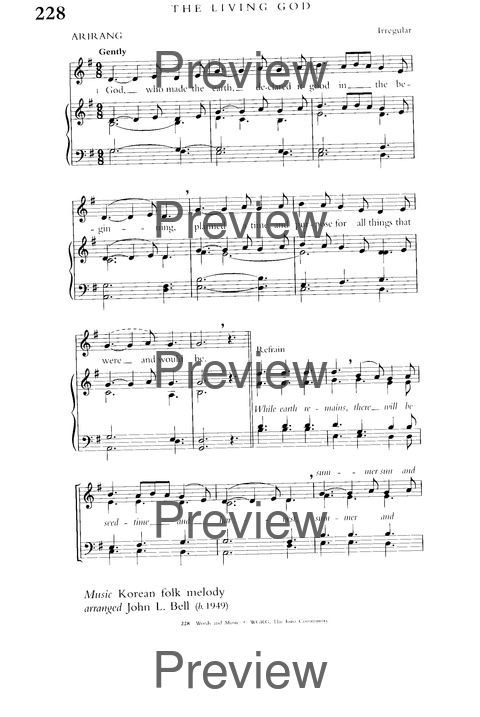