Tom Colvin (b. 1925; d. 2000) was trained as an engineer and worked in that profession in Burma and Singa­pore from 1945 to 1948. After studying theology at Trinity College, Glasgow University, he was ordained in the Church of Scotland in 1954. He served as missionary in Nyasa­land (now Malawi) from 1954 to 1958, in Ghana from 1958 to 1964, and again in Nyasa­land from 1964 to 1974. His work there included preaching, education, and community development. After completing his missionary work, Colvin became a minister in the United Reformed Church of England and served an inner-city church in London. He returned to Africa in 1984 as a development consultant to the Zimbabwe Christian Council. Colvin's writings include Christ's Work in Free… Go to person page >
^ top

Jesu, Jesu, Fill Us with Your Love

All texts published with CHEREPONI^ top

CHEREPONI was originally a traditional Ghanaian love song. Colvin named the tune after the village in which he first heard it and in which he wrote his text. The traditional African performance for melodies like CHEREPONI involves a leader and a group as well as various percussion instruments and clapping. Such a practice can easily be implemented in congregations that have one or several soloists or a choir. If you have drummers in your church, have them improvise some ostinato rhythms on drums and/ or tambourines. Because this is a perpetual energy kind of song, make sure that there are no rhythmic pauses between the refrain and the stanzas.

The hymnal harmony was prepared by Jane Marshall (b. Dallas, TX, 1924) for Colvin's collection Fill Us with Your Love (1983). A graduate of Southern Methodist University, Dallas, Marshall taught music theory at Southern Methodist's School of Music (1968-1975) and church music at the Perkins School of Theology at Southern Methodist (1975-1986). She was a church musician at several Presbyterian and United Methodist congregations in the Dallas area. Active in the American Guild of Organists, the Choristers Guild, and the American Choral Directors Association, Marshall has been honored for her leadership roles in the musical life of the United Methodist and the Southern Baptist denominations. She has composed many anthems, contributed to numerous choral collections, and published a number of hymn tunes.

Text: Jesu, Jesu, Fill Us with Your Love
^ top 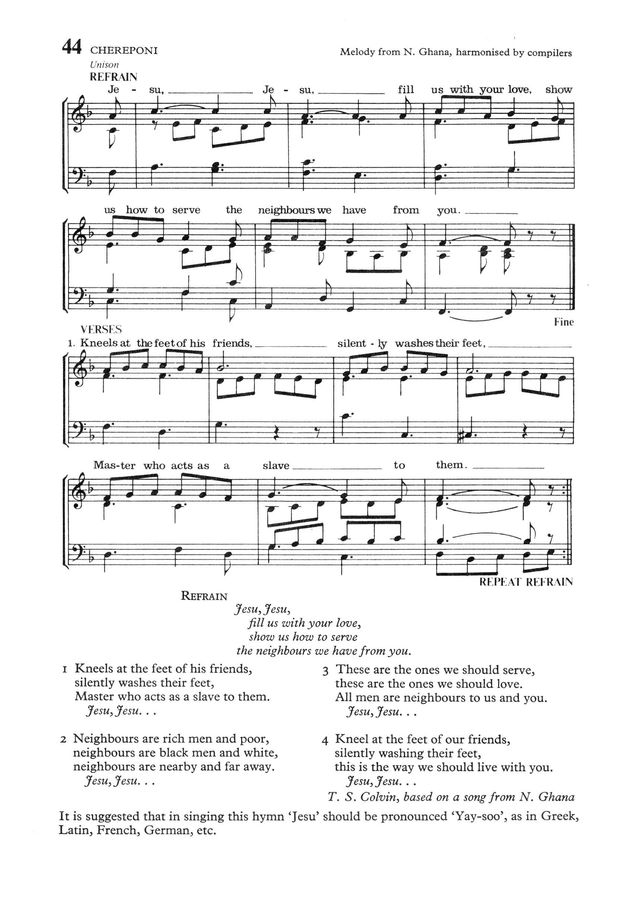 Come, Let Us Walk This Road Together #43

Hymns for a Pilgrim People #446

In Every Corner Sing #97

Lift Every Voice and Sing II #74