Of the Father's Love begotten

DIVINUM MYSTERIUM is a plainsong, or chant, associated with the “Divinum mysterium” text in manuscripts dating from the twelfth to fifteenth centuries. The tune was published in triple meter in Theodoricis Petri's Piae Cantiones (1582). Some hymnals retain the dance-like triple meter, while others keep the original unmeasured form of the chant. (It is one of the few chants in the Psalter Hymnal.)

Strong wave shapes characterize DIVINUM MYSTERIUM. Sing in unison with the accompaniment preferably played on manuals only. Sing also in speech rhythms, with some freedom in phrasing and tempo–not in the block-chord style of regular meter singing (thus no metronome marking).

The accompaniment was composed by Charles Winfred Douglas (b. Oswego, NY, 1867; d. Santa Rosa, CA, 1944), an influential leader in Episcopalian liturgical and musical life. Educated at Syracuse University and St. Andrews Divinity School, Syracuse, New York, he moved to Colorado for his health. There he studied at St. Matthew's Hall, Denver, and founded the Mission of the Transfiguration in Evergreen (1897). Ordained a priest in the Episcopal Church in 1899, he also studied in France, Germany and England, where he spent time with the Benedictines of Solesmes on the Island of Wight (1903-1906). For much of his life Douglas served as director of music at the Community of St. Mary in Peekskill, New York, and had associations with cathedrals in Denver, Colorado, and Fond du Lac, Wisconsin. He promoted chanting and plainsong in the Episcopal Church through workshops and publications such as The American Psalter (1929), the Plainsong Psalter (1932), and the Monastic Diurnal (1932). His writings include program notes for the Denver Symphony Orchestra, various hymn preludes; organ, as well as the book, Church Music in History and Practice (1937). He was editor of both the Hymnal 1916 and its significant successor, Hymnal 1940, of the Episcopal Church. Douglas's other achievements include a thorough knowledge of the life and culture of Hopi and Navajo natives, among whom he lived for a number of years.

Text: Of the Father's Love Begotten

Text: Of the Father's Love Begotten 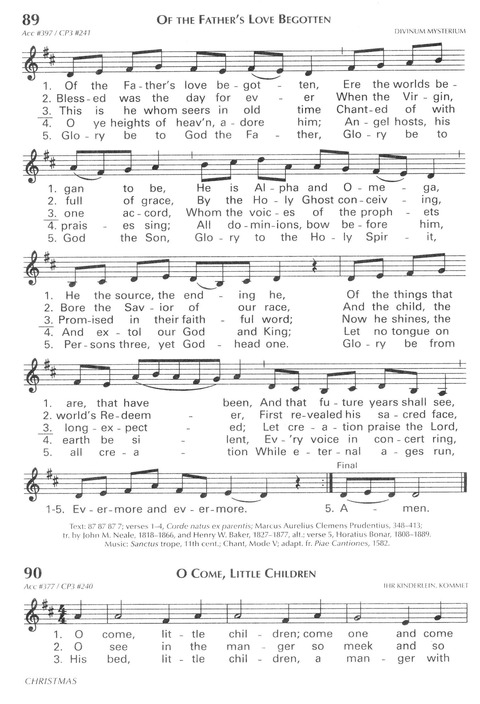 A New Hymnal for Colleges and Schools #48

Hymns for a Pilgrim People #63

The Hymnal for Worship and Celebration #118