O God, thou art the Father

The Clouds of Judgment Gather

Speak Forth Your Word, O Father

All texts published with DURROW^ top

DURROW was originally a traditional Irish folk melody associated with "Captain Thomson," a sea song from Ireland's Limerick region (Durrow is the name of a town in Ireland between Port Laoise and Kilkenny). The tune first appeared as a hymn tune in the Church Hymnary of 1927.

The harmonization by William France (b. New Liskeard, Ontario, Canada, 1912; d. Ottawa, Ontario, 1985) was taken from the Anglican and United Hymn Book (1971), for which he served on the hymnal committee. Educated at the University of Toronto, France was skilled in organ and piano as well as choral conducting and composition. He was organist and choirmaster at several United Church of Canada congregations and had a long and distinguished tenure at the Dominion-Chalmers United Church in Ottawa. France composed for piano and organ and wrote anthems and part songs.

Like many Irish tunes, DURROW is hexatonic (six tones, no A-flat in the melody). The tune has a wide range and a rounded bar form shape (AABA) with repeated melodic phrases that make it readily accessible. Sing the outer stanzas in unison and the middle ones in harmony.

Text: The Clouds of Judgment Gather 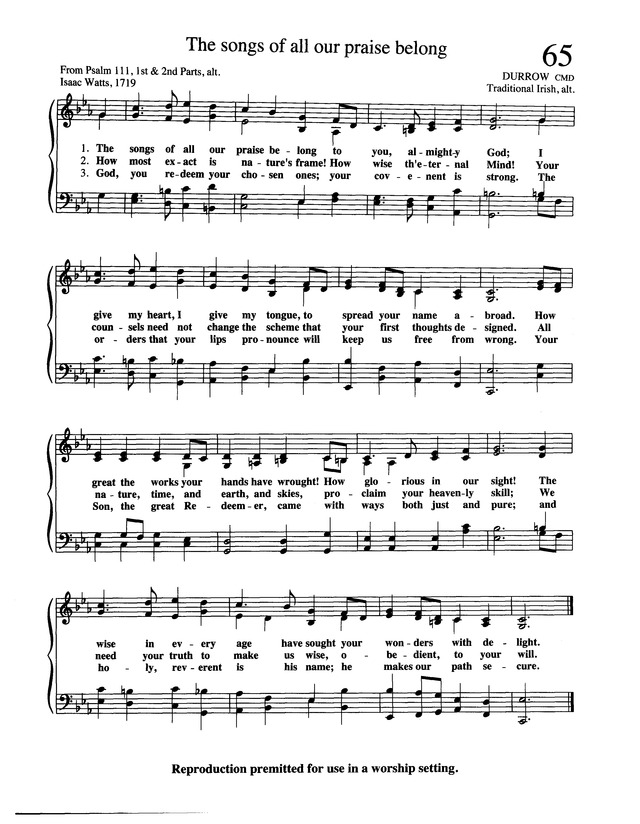 Hymns and Psalms #52b