FROM STRENGTH TO STRENGTH

FROM STRENGTH TO STRENGTH

All texts published with FROM STRENGTH TO STRENGTH^ top

Edward W. Naylor (b. Scarborough, Yorkshire, England, 1867; d. Cambridge, England, 1934) composed FROM STRENGTH TO STRENGTH for this text in 1902 for use at Emmanuel College, Cambridge, England. Once a student at Emmanuel, Naylor returned to become organist and lecturer in music history, a position he held until his death more than thirty years later. Named for the opening phrase of the final stanza, the tune was published in The Public School Hymn Book (1919).

Naylor also studied at the Royal College of Music in London, England, then served as organist at St. Michael, Chester Square (1889-1896), and briefly at St. Mary, Kilburn. Be returned to Cambridge in 1897, becoming assistant master at the Leys School before accepting the position at Emmanuel College. A composer of much service music and many anthems, Naylor also received acclaim for his cantatas and operas and was known for his writings about music, including Shakespeare and Music (1896) and The Poets and Music (1928).

One of the most thrilling unison tunes in the Psalter Hymnal, FROM STRENGTH TO STRENGTH opens with a hunting-horn figure (perfect fourth), which permeates the entire melody. Supported by a marching rhythm, the tune moves to a convincing climax in the fourth line. The tune's "strength, life, radiance, and thrust" (Stanley L. Osborne) force congregations to take the spiritual battle seriously. Crisp rhythms in the accompaniment and the use of trumpets will aid this battle call. 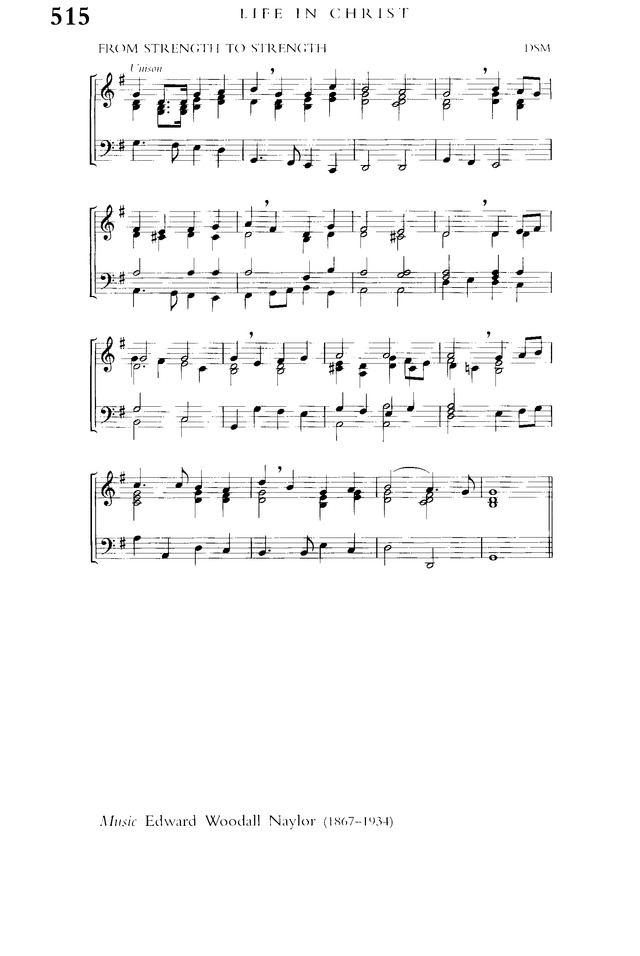 Ancient and Modern #780b