I Love the LORD, for He Has Heard My Voice

I Love the Lord, the Fount of Life

All texts published with GENEVAN 116^ top

GENEVAN 116 was first published in the 1562 edition of the Genevan Psalter, in which it was also the setting for Psalm 74. Seymour Swets (b. South Holland, IL, 1900; d. Grand Rapids, MI, 1982) harmonized the tune in 1954. This Mixolydian tune is one of the simplest, finest, and most loved of the Genevan repertoire. It is suitable for unison or part singing; sing in a majestic manner.

A 1922 graduate of Calvin College, Grand Rapids, Michigan, with a major in history, Swets received his M.A. from the University of Michigan in 1923. Later that year he was appointed to the Calvin College faculty to teach speech and to establish a music program. He taught at Calvin College until 1967 and was largely responsible for the remarkable growth of its music department. A chronicle of that era appears in his book, Fifty Years of Music at Calvin College (1973). Swets served on the committees that prepared the 1934 and the 1959 editions of the Psalter Hymnal and contributed harmonizations to both books.

Text: I Love the LORD, for He Has Heard My Voice 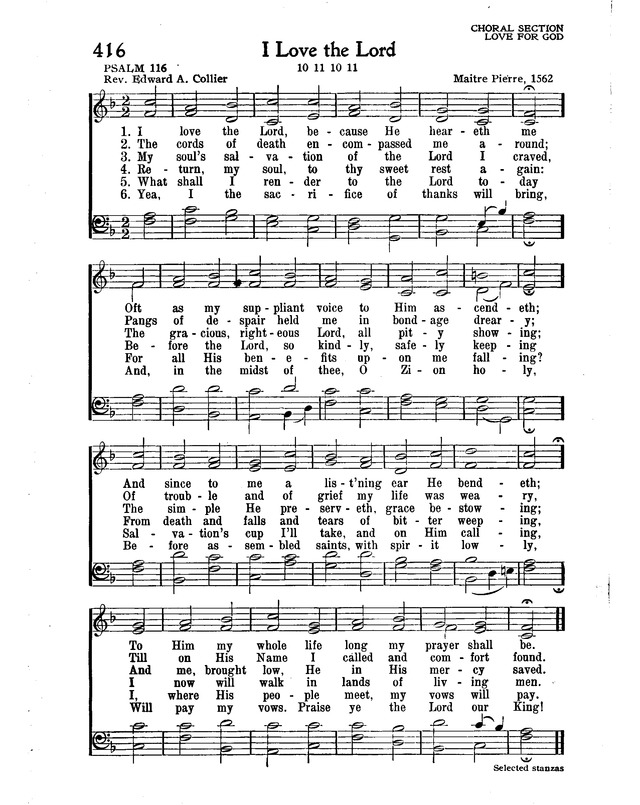 Psalms for All Seasons #116A