There's a Spirit in the Air

Spritely and bright, LAUDS fits well with Seerveld's text. The melody features an effective tonal and rhythmic climax in the last phrase. Use light organ accompaniment to sing the tune in unison. Harmony singing works well too. Keep a dotted half note pu1se throughout. A descant by Wilson for this tune was also published in Hymns for Celebration and in the Agape (Hope Publishing Co.) Hymnal Supplement.

John W. Wilson (b. Bournville, Birmingham, England, 1905; d. Guildford, Surrey, England, 1992) composed LAUDS in 1967 to be published with James Montgomery's (PHH 72) text "Songs of Praise the Angels Sang" in the British Methodist supplemen¬tary hymnal Hymns and Songs (1969). The tune's name derives from the praise theme of that text. Ever since a 1972 hymn sing organized by the Royal School of Church Music, London, however, LAUDS has been associated with Brian A. Wren's (PHH 311) text "There's a Spirit in the Air." LAUDS was published with that text in the British collection Hymns for Celebration (1974). It was this latter combination that inspired Calvin Seerveld in 1983 to write another text about the Holy Spirit for this tune.

Wilson was a major force in the modern British "hymn explosion." After receiving an education in mathematics and physics at Cambridge University, he turned his attention to music and studied at the Royal College of Music in London. He was director of music at Charterhouse, a famous British school (1947-1965), and taught music at the Royal College of Music (1965-1980). Treasurer of the Hymn Society of Great Britain and Ireland from 1965 to 1990, he organized and directed the popular "Come and Sing" hymn festivals at Westminster Abbey. Wilson edited many British hymnals, including the Clarendon Hymn Book (1936) , Hymns for Church and School (1964), and, most extensively, the Methodist Hymns and Psalms (1983). In addition he contributed his editorial expertise to a number of hymnal supplements and his encouragement to various modern hymn authors and composers. His own tunes have been published in a variety of British and American hymnals. Wilson was honored as a Fellow of the Hymn Society in the United States and Canada in 1985.

Text: There's a Spirit in the Air
^ top 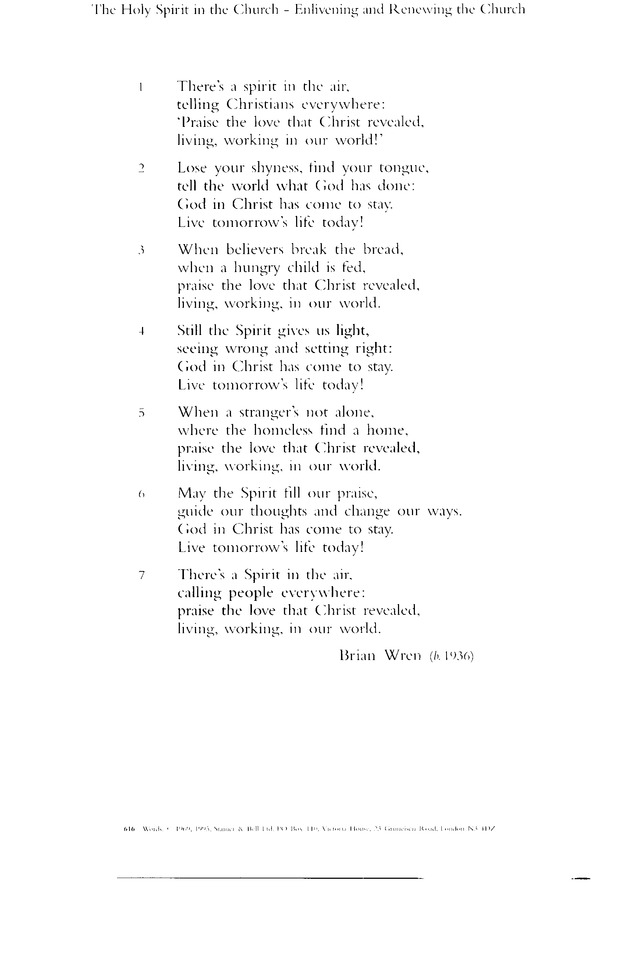 A New Hymnal for Colleges and Schools #53

Tune Title: Lauds First Line: There's a spirit in the air Date: 1992
A New Hymnal for Colleges and Schools #53