Purer yet and purer, I would be in mind

Now the Day Is Over

MERRIAL (sometimes known as LYNDHURST) is a fine tune by Frederic William Blunt (b. Mayfair, Westminster, Middlesex, England, 1839; d. Kensington, London, England, 1921). Not much is known about Blunt except that he was a London solicitor by profession and a musician by avocation. He originally composed the tune in 1871 for James Montgomery's "In the Hour of Trial." MERRIAL was published in the British collection Church Praise, with Tunes (1883) as a setting for Sabine Baring-Gould's "Now the Day Is Over." MERRIAL increases in dramatic intensity as it progresses. Sing it in parts on a firm half-note pulse.

MERRIAL should not be confused with the popular tune of the same name by Joseph Barnby (438) set to "Now the Day Is Over" in 1869, but with no tune name given. When introducing Barnby's tune to the United States in Spiritual Songs (1878), Charles S. Robinson named it EMMELAR, after the initials of his daughter, M.L.R. He later renamed it MERRIAL, for his daughter Mary L.

Text: Purer Yet and Purer

Text: Unto God Our Savior

Text: Unto God Our Savior
^ top 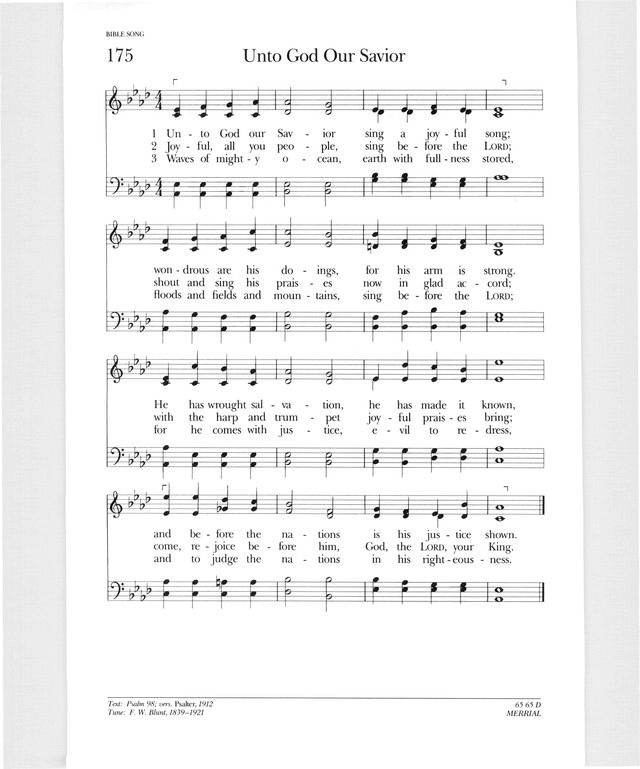