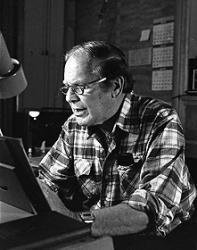 From the obituary in the Star Tribune, Nov. 11-13, 2007:Sateren, Leland B. 94, Edina, died Saturday, Nov. 10, 2007. Sateren, a renowned composer and conductor, served as chairman of the Augsburg College Department of Music from 1950 to 1973, and as director of the Augsburg Choir from 1950 until his retirement in 1979. Survived by devoted wife, Pauline; sons, Terry, Mark (Judi), Roald (Shelley); daughter, Kirsten Bergherr (Jon); and grandchildren, Stacy Lindholm (Pete), Anne Sateren Burow (Matt), Ben Bergherr, Sara Bergherr, Erik Sateren, and Anders Sateren. Sateren is also survived by sisters, Margaret Trautwein, Norma (Ray) Anderson, Sylvia (Dean) Elness; and brother, Donald Sateren. The family would like to thank the staff at Redeemer Res… Go to person page >
^ top

As Men of Old Their First Fruits Brought

Behold! the mountain of the Lord

All texts published with REGWAL^ top

REGWAL was published with von Christierson's text in 1963 in an anthem setting composed by Leland B. Sateren (b. Everett, WA, 1913). The tune consists of four lines, the first of which reminds us of GENEVAN 124's opening phrase (see also TOULON, 52). The final line rises to an impressive climax. Sing stanzas 1 and 2 antiphonally in unison, and bring everyone together in harmony for stanza 3, with some extra color from the organ.

A noted Lutheran musician, Sateren has long been associated with Augsburg College in Minneapolis, Minnesota. He received his B.A. there in 1935 and, after further study at the University of Minnesota, became a member of Augsburg's music faculty in 194 a position he retained until his retirement. Chairman of the music department from 1950 to 1973, Sateren also directed the Augsburg Choir. He has conducted choral schools throughout Scandinavia, has often served as judge at music festivals, and was active in the American Choral Directors' Association. Publisher of over three hundred choral works and many professional articles on music and music education, he also served on the committees that produced the Service Book and Hymnal (1958) and the Lutheran Book of Warship (1978).