Henry Smart (b. Marylebone, London, England, 1813; d. Hampstead, London, 1879), a capable composer of church music who wrote some very fine hymn tunes (REGENT SQUARE, 354, is the best-known). Smart gave up a career in the legal profession for one in music. Although largely self taught, he became proficient in organ playing and composition, and he was a music teacher and critic. Organist in a number of London churches, including St. Luke's, Old Street (1844-1864), and St. Pancras (1864-1869), Smart was famous for his extemporiza­tions and for his accompaniment of congregational singing. He became completely blind at the age of fifty-two, but his remarkable memory enabled him to continue playing the organ. Fascinated by organs as a youth… Go to person page >
^ top

See the Conqueror mounts in triumph

Henry T. Smart (PHH 233) composed REX GLORIAE for this text; the hymn was published in the 1868 Appendix to Hymns Ancient and Modern. Stanley L. Osborne (PHH 395) suggests that Smart initially intended REX GLORIAE as a tune for children. Derived from the topic of Wordsworth's text, the tune's name means “King of Glory.”

A festive tune, REX GLORIAE is in rounded bar form (AABA). Sing in unison and use vigorous accompaniment bordering on marcato. 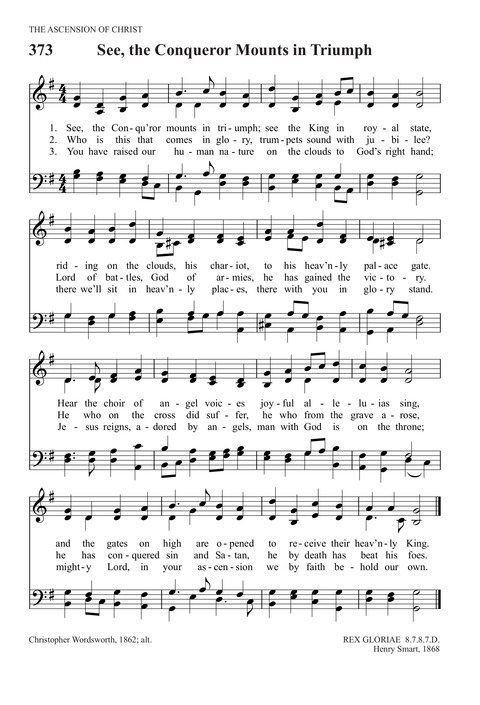