All Things Bright and Beautiful

ROYAL OAK is presumably named for a tree at Boscobel, Shropshire, England, in which King Charles II hid during the Battle of Worcester, 1651. A folk song that may well be older than the seventeenth century, ROYAL OAK was associated in the 1600s with the loyalist song "The Twenty-Ninth of May," a song that celebrated the restoration of the monarchy under Charles II on May 29, 1660. Originally found in The Dancing Master (1686), the tune was arranged as a hymn setting by Martin F. Shaw and published in his Song Time (1915). ROYAL OAK is usually associated with the Alexander text in modern hymnals.

John Worst (b. Grand Rapids, MI, 1940) prepared the harmonization, first published in the Psalter Hymnal Supplement in 1974. Worst is a composer as well as professor of music at Calvin College, Grand Rapids, a position he has held since 1966. Previously he taught at Dordt College, Sioux Center, Iowa, and the University of Michigan. Educated at Calvin College, Ohio State University, and the University of Michigan (Ph.D.), Worst was an editor of Songs of Rejoicing: Hymns for Worship, Meditation and Praise (1989). He was also one of the contributors to Youth, Electronic Media, and Popular Art and the arranger of the Hymn of the Month, sets 1-4, for Christian Schools International.

This light, bright, and energetic tune is well suited to the colorful text. It requires unison singing throughout, although with a few simple changes the refrain could be sung in parts. Use light accompaniment. Try accompanying with guitars, flutes, or recorders, or use just three-part texture on the organ for the stanzas and four-part texture on the refrain. This is a great children's hymn–be sure to have them sing a stanza or two by themselves and then have the congregation join in on the refrain. 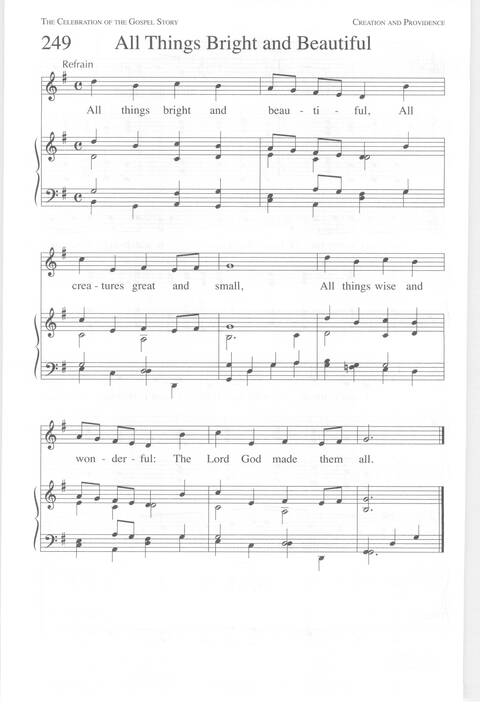 Ancient and Modern #533a

Hymns for a Pilgrim People #35

Hymns of Glory, Songs of Praise #137b

The Irish Presbyterian Hymbook #18a