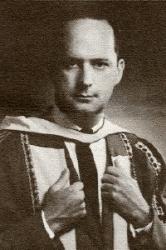 O Master Workman of the Race

O Praise the LORD, for He Is Good

All texts published with SEDGWICK^ top

SEDGWICK, composed by Lee Hastings Bristol, Jr. (b. Brooklyn, NY, 1923; d. Syracuse, NY, 1979), in 1951, was first published in Hymns for Children and Grown-ups (1952) as a setting for the text "My Master Was a Worker" by William G. Tarrant. Bristol co-edited that hymnal with Harold W. Friedell. Virtually a rounded bar form (AA'BA"), SEDGWICK is a well-crafted tune that inspires dynamic congregational singing in parts, but it must not be rushed.

After earning a B.A. degree from Hamilton College, Clinton, New York, Bristol studied organ at Trinity College of Music, London, England, and completed graduate work at the Institute for International Studies, Geneva. From 1948 to 1962 he worked primarily in advertising and public relations for the family business, the Bristol-Myers Company in New York, and then served as president of Westminster Choir College, Princeton, New Jersey, from 1962 to 1969.

A recipient of eleven honorary degrees, Bristol composed a number of anthems and edited two hymnal supplements, Songs for Liturgy and More Hymns and Spiritual Songs (1972), for the joint commission on church music of the Protestant Episcopal Church. He also published The Lamb and Other Carols (1951) and Hymns for Children and Grown-ups. In 1972 Bristol was honored as a Fellow of the Hymn Society in the United States and Canada.

Text: O Praise the LORD, for He Is Good
^ top