When His Salvation Bringing

All texts published with TOURS^ top

The tune was named after its composer and published in the British volume The Hymnary (1872). TOURS has four broad phrases. Its repetitions of melodic and rhythmic units make it accessible and loved. The harmony suggests a stately tempo.

Berthold Tours (b. Rotterdam, the Netherlands, 1838; d. Fulham. London, England, 1897) received an early musical education from his father, a well-known Dutch organist of the St. Laurents Kerk, Rotterdam, and continued his training in conservatories in Leipzig and Brussels. He also spent two years studying in Russia. Given the opportunity to teach violin in London and to play in several orchestras, he moved to London in 1861 and settled there permanently. In 1862 Tours became organist of the Swiss Church (Holborne) in London. From 1878 on he served as an editor and arranger for Novello, the well-known music publisher. Tours wrote piano arrangements of operas and oratorios but is best remembered for his hymn tunes, anthems, and liturgical service music.

Text: From Glory unto Glory

Text: To Thee, My God and Savior

Text: When, His Salvation Bringing

Text: From Glory Unto Glory

Text: Come, All Who Fear the Lord God
^ top 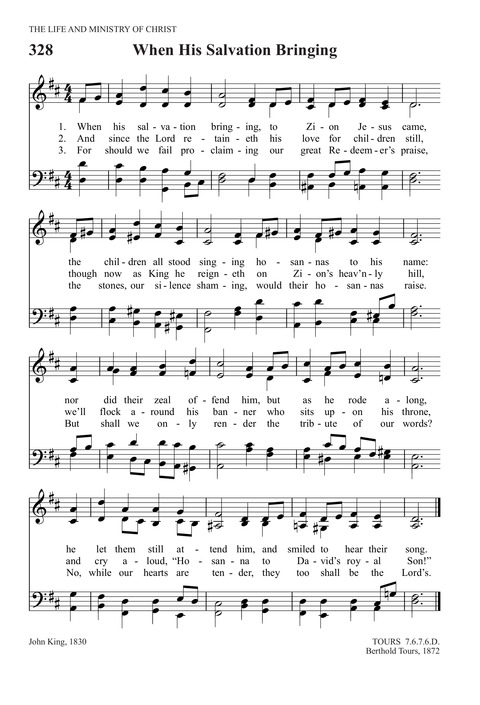