This song includes a plea and a prayer seeking God’s leading and care. Those who seek this leading can know that the Holy Spirit always aims to provide just such care for the believer. He not only renews our hearts, but also “leads us into truth, and helps us to pray, stands by us in our need, and makes our obedience fresh and vibrant” (Our World Belongs to God, paragraph 29).

O God, our Help in past, present, and future days,
you know our deepest thoughts and needs before we can even express them.
When our world turns upside down, help us to remember happier days—
not as something lost, but as a foretaste of good things yet to come.
We pray in the name of the coming King. Amen.
— Psalms for All Seasons (http://www.psalmsforallseasons.org)
God, you are light and truth.
When our world seems dark and our days filled with lies,
fill our hearts with your joy and our lips with songs of praise to you,
Father, Son, and Holy Spirit—now and forever. Amen.
— Psalms for All Seasons (http://www.psalmsforallseasons.org)
332

This psalm setting is derived from a choral setting by Greg Scheer and can be found in the collection GladSong Choirbook, Vol. 1 (Augsburg Fortress Press).
— Psalms for All Seasons (http://www.psalmsforallseasons.org)
332

When I was asked to lead staff devotions one Wednesday at Bellefield in 1993, I decided to talk about the use of the Psalms in modern worship, calling particular attention to Psalm 42 and 43. I was already familiar with the text because I had used it in a piece for two sopranos and mixed ensemble a few years earlier, but I hadn’t done any serious study of it at that time. I found out that Psalm 42 and 43 were probably intended as a set because of the repeated “Why are you downcast, O my soul?” which unites the two. I was also struck by the poignancy of the Psalm.
It’s easy to gloss over the pain, sorrow, and anger which we find in many Psalms, concentrating only on the nice and joyful images; but I believe that in removing the tension of the writing we also eliminate the possibility of resolution. I’ve always been particularly disappointed with the popular “As the Deer” because it uses only the pleasant image of the deer longing for water, but quickly moves on to other imges when the Psalm gets too deep. As I mulled over the reaction I’d get from the staff for calling into question such a well-loved song, I realized that I needed to offer an alternative rather than just being critical of this song.
So I set to work on writing my own version of these Psalms. It seemed almost obligatory to use the repeated “Why are you downcast?” as a chorus, because it was the recurring element in the Psalm and could serve the same purpose in a modern song. I also wanted to show both the depression and the hope that are so evident in Psalm 42 and 43. My version is not typical of the praise and worship genre to be sure, but I’ve been told repeatedly that this is the song that meets people where they are and gives them hope that God will see them through their struggles.
The most difficult thing about this song is figuring out where to breathe! If one singer is leading make sure they make breath marks beforehand or else they’ll break the prhases in peculiar places; if two or more are leading try to get them to stagger the breathing to create the effect of one long line. Finger-picked guitar works beautifully as the main chordal instrument, and can even replace the written piano part. A warm organ or synthesizer sound can effectively fill out the sound of the chorus, and you may consider repeating the last chorus a cappella for a quiet ending.
A choir version of this song is available and makes a convenient way to introduce the song to your congregation. It is written for solo, four part choir, piano and optional guitar. The choir provides a warm texture in the first three choruses and then takes over the melody a cappella in the last chorus while the soloist sings a descant.
— Greg Scheer 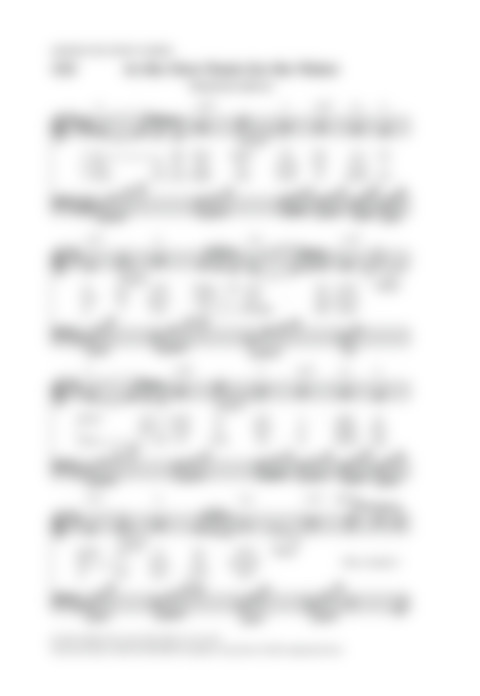