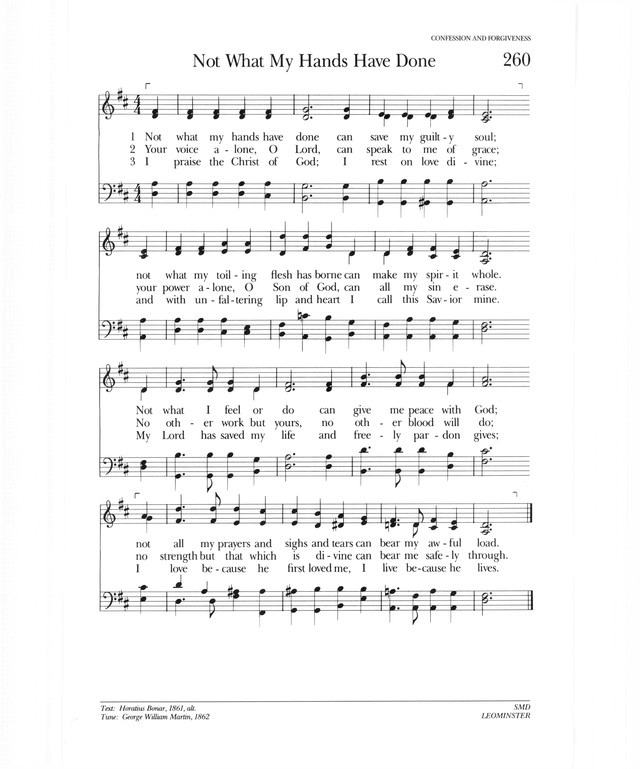 1 Not what my hands have done
can save my guilty soul;
not what my toiling flesh has borne
can make my spirit whole.
Not what I feel or do
can give me peace with God;
not all my prayers and sighs and tears
can bear my awful load.


2 Your voice alone, O Lord,
can speak to me of grace;
your power alone, O Son of God,
can all my sin erase.
No other work but yours,
no other blood will do;
no strength but that which is divine
can bear me safely through.


3 I praise the Christ of God;
I rest on love divine;
and with unfaltering lip and heart
I call this Savior mine.
My Lord has saved my life
and freely pardon gives;
I love because he first loved me,
I live because he lives.

The famous Scottish preacher and hymn author Horatius Bonar (b. Edinburgh, Scotland, 1808; d. Edinburgh, 1889) wrote this text in twelve four-line stanzas, each beginning with the line "Not what these hands have done." He first published the text in his Hymns of Faith and Hope (2nd series, 1861). The Psalter Hymnal collates the most popular stanzas and includes minor textual changes.

Bonar subtitled the text "Salvation through Christ alone," and that is surely its theme: my salvation is entirely due to the grace of God, my own works have no merit at all, and nothing but the blood of Christ will do (st. 1-2); my natural response, then, is praise, for "my Lord has saved my life" (st. 3)! Bonar was a staunch Calvinist; in writing this hymn he stood resolutely behind John Calvin in the Calvin-Arminius controversy (see the introduction to the Canons of Dort in the Psalter Hymnal for a brief explanation about Calvin's and Arminius's teachings).

Bonar was educated at the University of Edinburgh. At the age of thirty he became a preacher in the Presbyterian Church of Scotland, a church that underwent a schism "the Disruption"– in 1843. A major question in the controversy was whether a minister could be forced on a congregation by an aristocratic sponsor. Many church leaders and the government agreed that he could, but one-third of the ministers, including Bonar, disagreed, and in 1843 this group formed the Free Church of Scotland. Bonar was a prolific, popular author of tracts, sermons, and hymns (even though his congregation sang exclusively psalms during much of his life). One of Bonar's great interests was biblical prophecy and the return of Christ, an interest reflected in some of his hymns. He published several hundred hymns in collections such as The Bible Hymn Book (1845), Hymns of Faith and Hope (1857,1861), and Hymns of the Nativity (1879). Many were written casually, illustrating very little interest in poetic finesse, but a few have had staying power and are still found in many modern hymnals.

Liturgical Use:
Service of confession and forgiveness-either sing all three stanzas without interruption (since the hymn basically moves through confession/forgiveness/response) or intersperse spoken words between the stanzas.

George William Martin (b. London, England, 1825; d. London, 1881) composed LEOMINSTER, named for a town in the county of Hereford and Worcester (formerly Herefordshire), England. The tune was first published in The Journal of Part Music (vol. 2, 1862), in which it was titled THE PILGRIM'S SONG. Martin was editor of that publica¬tion from 1861 to 1862. As a boy Martin was a chorister in St. Patrick's Cathedral. He taught music at the Normal College for Army Schoolmasters in Chelsea and at St. John's Training College in Battersea. In 1849 he became organist at Christ Church, Battersea. Well-known for his skill in training children's choirs, Martin also conducted mass choirs, such as the Metropolitan Schools Choral Society. He composed glees, madrigals, and part-songs, and edited oratorios of Handel and Haydn.

Arthur S. Sullivan (PHH 46) later arranged and harmonized the tune and labeled it as an "Old Melody" in his Church Hymns with Tunes (1874). LEOMINSTER's many repeated tones in lines 1 and 3 give way to the more dramatic shape oflines 2 and 4. The tune's simplicity allows for bringing in harmony, perhaps with stanza 2 unaccompanied. Accompany stanza 3 with a bright and strong organ registration.