310. Bread of the World, in Mercy Broken 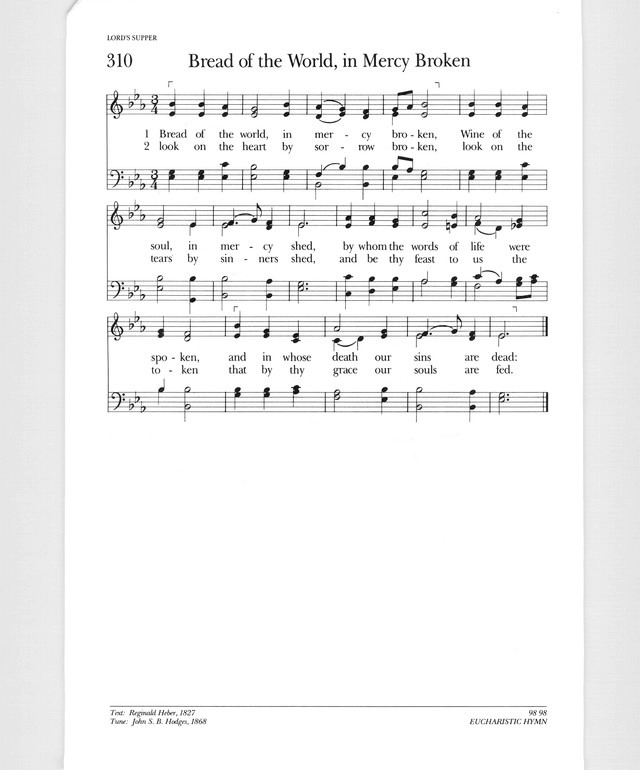 1 Bread of the world, in mercy broken,
Wine of the soul, in mercy shed,
by whom the words of life were spoken,
and in whose death our sins are dead:


2 look on the heart by sorrow broken,
look on the tears by sinners shed,
and be thy feast to us the token
that by thy grace our souls are fed.

Written by Reginald Heber (PHH 249), "Bread of the World" was first published posthumously in his Hymns written and adapted to the Weekly Church Service of the Year (1827); it was subtitled "Before the Sacrament."

The text is a prayer asking Christ to look on us with mercy and to feed us with his grace. Though written in two stanzas, it is one continuous thought. A devotional text with strong poetic images–"bread of the world" and "wine of the soul"–this hymn invites confession of sin and the acceptance of divine grace.

Liturgical Use:
As Heber said, "Before the sacrament"–use this hymn as part of the service of confession and forgiveness or during the communion liturgy as a substitute for the traditional singing of the Agnus Dei.

John Sebastian Bach Hodges (b. Bristol, Gloucestershire, England, 1830; d. Baltimore, MD, 1915) composed EUCHARISTIC HYMN for Heber's text in 1868, while he was rector at Grace Episcopal Church, Newark, New Jersey. He first published the tune in his Book of Common Praise (1869) and named it after the sacramental service for which Heber wrote the text. Sing EUCHARISTIC HYMN in harmony, preferably without accompaniment and always in its entirety. It also makes a fine communion motet for a choir.

The son of Edward Hodges (PHH 55), John came to the United States at the age of fifteen. Educated at Columbia University, New York City, and General Theological Seminary, New York City, he was ordained in 1855. After having served Episcopal churches in Pittsburgh, Chicago, and Newark, he devoted the remainder of his career to St. Paul Church in Baltimore (1870-1906). There Hodges replaced the mixed choir with a choir of men and boys. He composed over a hundred hymns and anthems and compiled The Book of Common Praise (1869) and the revised edition of Hymn Tunes (1903). He was also active on the committees that produced the Episcopal Hymnal (1874) and Hymnal(1892).

Since the publication of William Mercer's Church Psalter and Hymn Book (1854), many hymnals have set Heber's text to GENEVAN 98/118 (see 98, 118, or 314) in one long stanza. That tune–much loved in the Reformed tradition–is a useful alternate because it helps to bind together the two short stanzas into one longer prayer. To create a longer Lord's Supper hymn, combine 310 and 314 into one song or choral anthem using GENEVAN 98/118.