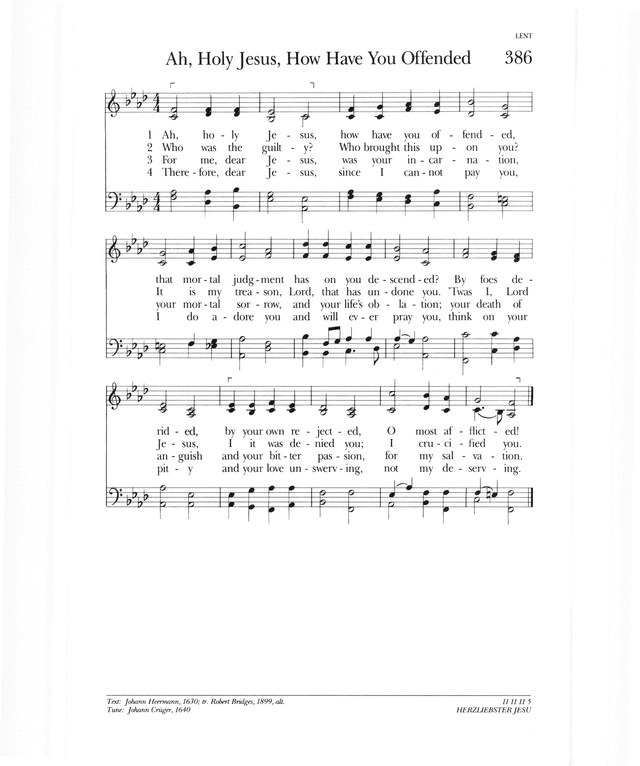 1 Ah, holy Jesus, how have you offended,
that mortal judgment has on you descended?
By foes derided, by your own rejected,
O most afflicted!


2 Who was the guilty? Who brought this upon you?
It is my treason, Lord, that has undone you.
'Twas I, Lord Jesus, I it was denied you;
I crucified you.


3 For me, dear Jesus, was your incarnation,
your mortal sorrow, and your life's oblation;
your death of anguish and your bitter passion,
for my salvation.


4 Therefore, dear Jesus, since I cannot pay you,
I do adore you and will ever pray you,
think on your pity and your love unswerving,
not my deserving.

Using imagery from Isaiah 53 as well as from other Bible passages, the text sets forth the Christian doctrine of Christ's atonement: Christ died for the sin of the world in a substitutionary death on the cross. The most striking aspect of the text is its personalization: it was for my sin that Christ died! Thus a generic doctrine has become a deeply personal confession and profound meditation.

Johann Heermann (b. Raudten, Silesia, Austria, 1585; d. Lissa, Posen [now Poland], 1647 ) wrote this text during the misery of the Thirty Years' War (161848). The fifteen stanza German text ("Herzliebster Jesu, was hast du verbrochen") was published in Heermann's Devoti Musica Cordis in 1630 with the heading “The cause of the bitter offerings of Jesus Christ, and consolation from his love and grace. From Augustine.” Heermann based his text on the seventh meditation from Jean de Fecamp's Meditationes, a Latin work wrongly attributed by many scholars, including Heermann, to St. Augustine.

Heermann's own suffering and family tragedy led him to meditate on Christ's undeserved suffering. The only surviving child of a poor furrier and his wife, Heermann fulfilled his mother's vow at his birth that, if he lived, he would become a pastor. Initially a teacher, Heermann became a minister in the Lutheran Church in Koben in 1611 but had to stop preaching in 1634 due to a severe throat infection. He retired in 1638. Much of his ministry took place during the Thirty Years' War. At times he had to flee for his life and on several occasions lost all his possessions. Although Heermann wrote many of his hymns and poems during these devastating times, his personal faith and trust in God continued to be reflected in his lyrics. He is judged to be the finest hymn writer in the era between Martin Luther and Paul Gerhardt, one whose work marks a transition from the objective hymns of the Reformation to the more subjective hymns of the seventeenth century. His hymn texts were published in collections such as Devoti Musica Cordis, Hauss- und Hertz-Musica (1630, expanded in 1636, 1644), and Sontags- und Fest-evangelia (1636).

Based on both Latin and German sources, the rather free translation is by Robert S. Bridges (b. Walmer, Kent, England, 1844; d. Boar's Hill, Abingdon, Berkshire, England, 1930). That translation was first published in five stanzas in 1897 in Hymns in Four Parts, a hymn book reissued in 1899 as the famous Yattendon Hymnal. In a modern listing of important poets Bridges' name is often omitted, but in his generation he was considered a great poet and fine scholar. He studied medicine and practiced as a physician until 1881, when he moved to the village of Yattendon. He had already written some poetry, but after 1881 his literary career became a full-time occupation, and in 1913 he was awarded the position of poet laureate in England. Bridges published The Yattendon Hymnal (1899), a collection of one hundred hymns (forty-four written or translated by him with settings mainly from the Genevan psalter, arranged for unaccompanied singing. In addition to volumes of poetry, Bridges also published A Practical Discourse on Some Principles of Hymn-Singing (1899) and About Hymns (1911).

Partially based on earlier melodies (including the Genevan tune for Psalm 23), HERZ LIEBSTER JESU was composed by Johann Crüger (PHH 42) and published in his Neues vollkömliches Gesangbuch (1640). Johann S. Bach (PHH 7) used the tune in both his St. Matthew Passion and St. John Passion, and various other composers have written preludes on the chorale.

HERZLIEBSTER JESU is a sober tune in minor tonality; it provides a strong match for Heermann's text. Sing with solemnity. Accompany in a subdued manner except at the final phrase of stanza 3, "for my salvation," a phrase that merits full organ accompaniment.