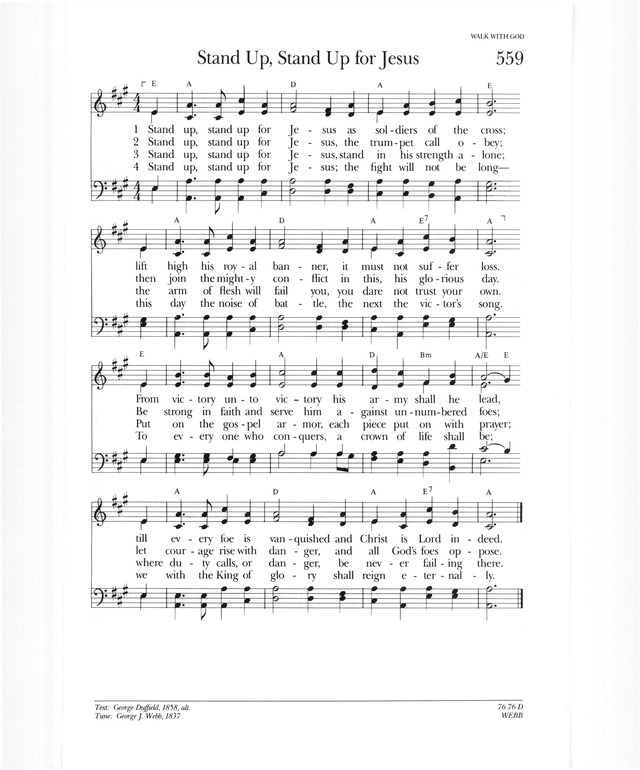 1 Stand up, stand up for Jesus
as soldiers of the cross;
lift high his royal banner,
it must not suffer loss.
From victory unto victory
his army shall he lead,
till every foe is vanquished
and Christ is Lord indeed.


2 Stand up, stand up for Jesus,
the trumpet call obey;
then join the mighty conflict
in this, his glorious day.
Be strong in faith and serve him
against unnumbered foes;
let courage rise with danger,
and all God's foes oppose.


3 Stand up, stand up for Jesus,
stand in his strength alone;
the arm of flesh will fail you,
you dare not trust your own.
Put on the gospel armor,
each piece put on with prayer;
where duty calls, or danger,
be never failing there.


4 Stand up, stand up for Jesus,
the fight will not be long
this day the noise of battle,
the next the victor's song.
To every one who conquers,
a crown of life shall be;
we with the King of glory
shall reign eternally.

George Duffield, Jr. (b. Carlisle, PA, 1818; d. Bloomfield, NJ, 1888), was inspired to write this text after hearing the dying words of a Presbyterian colleague, Dudley A. Tyng. Ousted from his own congregation for his strong anti-slavery stance, Tyng preached to large crowds in weekday meetings sponsored by the YMCA. His work spearheaded an evangelical revival in Philadelphia early in 1858. At Tyng's deathbed, caused by a farm accident in which he lost an arm, Duffield and others asked if he had any final message. Tyng replied, 'Tell them to stand up for Jesus!" At Tyng's memorial service on April 25, 1858, Duffield preached on Ephesians 6:14 and concluded his sermon by reading his new hymn text, "Stand Up, Stand Up for Jesus." Several lines in that original text referred to Tyng's words and ministry. The six-stanza text was first distributed in leaflet form and then was published in The Church Psalmist (1859). The Psalter Hymnal follows the custom of most hymnals of including the original stanzas 1, 3, 4, and 6 with updated language.

The challenge of "Stand Up for Jesus" is proclaimed through the military metaphors Paul uses in Ephesians 6:10-18. Although some decry the warlike imagery, the spiritual battle that Christians must fight is very real. Christ's victory is assured even if we do not always move "from victory unto victory" in our earthly lives.

A graduate of Yale College and Union Theological Seminary, Duffield served eight Presbyterian churches in New York, New Jersey, Pennsylvania, Illinois, and Michigan. He was a regent for the University of Michigan for seven years, served as editor of the Presbyterian paper Christian Observer; and promoted evangelistic work with his personal wealth. Duffield's interest in hymnody influenced his son, Samuel W. Duffield, to publish English Hymns, Their Authors and History (1886).

Liturgical Use:
Profession of faith; adult baptism; ordination and commissioning services; various other times of worship.

George J. Webb (b. Rushmore Lodge, near Salisbury, Wiltshire, England, 1803; d. Orange, NJ, 1887) composed WEBB (also known as MORNING LIGHT) on a voyage from England to the United States. The tune was published in The Odeon, a collection of secular music compiled by Webb and Lowell Mason (PHH 96) in 1837. There it was set to "'Tis Dawn, the Lark Is Singing." WEBB was used as a hymn tune in The Wesleyan Psalmist (1842), where it was the setting for "The Morning Light Is Breaking" (thus its other title).

William B. Bradbury (PHH 114) paired WEBB to Duffield's text, an association that appeared in many ofIra D. Sankey's (PHH 73) hymnals. Hymnologist Stanley L. Osborne says that this tune "goes with a roar." A rounded bar form (AABA), WEBB has a very simple harmony. Sing the entire hymn in parts-standing, of course!

Although his parents had intended that he become a minister, Webb's early skills in music soon pointed toward a career in music. He studied organ at Salisbury Cathedral and became organist in a church in Falmouth. In 1830 he immigrated to the United States, settled in Boston, and became organist in the Old South Church, a position he held for the next forty years. In his later years Webb taught singing in Orange, New Jersey, and New York City and published two books on voice pedagogy. Working with Lowell Mason on a number of projects, including the publishing of The National Psalmist (1848), Webb also taught music at Mason's Boston Academy of Music and was president of the Handel and Haydn Society. In 1835 Webb joined the Swedenborgian Church and was influential in shaping its musical service book of 1836 as well as the book's revisions in 1854 and 1876. He also edited other songbooks such as The Massachusetts Collection of Psalmody (1840), The Psaltery (1845), The Melodist (1850), and
Cantica Ecclesiastica (1859).