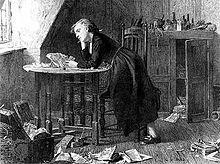 Chatterton, Thomas, was born at Bristol, Nov. 20, 1752. He received his early education at Colston's charity school in that city, and then was articled to an attorney. In April, 1770, he proceeded to London, where he earned but little through his literary labours. Overcome at last by poverty and distress, he poisoned himself in August the same year. He was buried at St. Andrew's, Holborn. His Miscellanies in Prose and Verse were published posthumously in 1778. From this work two hymns have come into common use:—
1. Almighty Framer of the skies. (1768.) Christmas.
2. O God, Whose thunder shakes the sky. (1768.) Resignation.

Thomas Chatterton (20 November 1752 – 24 August 1770) was an English poet. Although fatherless and raised in poverty, he was an exceptionally studious child, publishing mature work by the age of eleven. He was able to pass-off his work as an imaginary 15th-century poet called Thomas Rowley, chiefly because few people at the time were familiar with medieval poetry, though he was denounced by Horace Walpole. At seventeen, he sought outlets for his political writings in London, having impressed the Lord Mayor, William Beckford, and the radical leader John Wilkes, but his earnings were not enough to keep him, and he poisoned himself in despair. His unusual life and death attracted much interest among the romantic poets, and Alfred de Vigny wrote a play about him that is still performed today.
Wikipedia Biography
TextsTunesHymnals