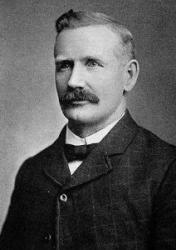 Crist was com­pos­ing as ear­ly as 1888, and at least through 1910, when he scored the FLOWER GIRL WALTZ. He worked for 30 years as a suc­cess­ful mu­sic pub­lish­er, start­ing in Moul­trie, Ohio, where he also taught, farmed, and in New Al­ex­an­der, served as a church mu­sic di­rec­tor and Sun­day school su­per­in­ten­dent. In 1915, he moved to Al­li­ance, Ohio (where he be­came pre­si­dent of the Peo­ples Bank of Al­li­ance). His works in­clude: