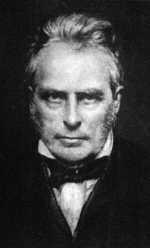 Darby, John Nelson, M.A., youngest son of John Darby of Leap, King's Co., Ireland, was born at Westminster, Nov. 18, 1800; educated at Trinity College, Dublin, where he graduated in 1819; and in due course was called to the Bar. He subsequently took Holy Orders; but in a short time allied himself with the Plymouth Brethren. In the exercise of his ministry amongst them he visited most parts of the world, and translated the Bible into English, French, and German. His published works, including a Synopsis of the Books of the Bible; Notes on Revelations, &c, are numerous. He died at Bournemouth, April 29, 1882.

All these hymns were published anonymously; and the ascriptions of authorship of 1-5 are given from the "S. MSS." The same manuscripts say that he edited the work above referred to: A Few Hymns and some Spiritual Songs, Selected, 1856, for the Little Flock. Lond. Groombridge & Sons.