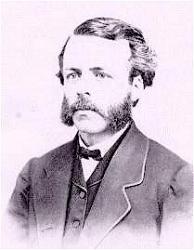 Joseph H. Gilmore (b. Boston, MA, 1834; d. Rochester, NY, 1918) Educated at Brown University, Providence, Rhode Island, and Newton Theological Seminary, Newton, Massachusetts, Gilmore was ordained to the Baptist ministry in 1862. He served churches in Fisherville, New Hampshire, and Rochester, New York. In 1868 he was appointed to the English faculty at the University of Rochester, where he served until retirement in 1911. He published various literary works, including Outlines of English and American Literature (1905).

============
Gilmore, Joseph Henry, M. A., Professor of Logic in Rochester University, New York, was born at Boston, April 29, 1834, and graduated in Arts at Brown University, and in Theology at Newton Theological Institution. In the latter he was Professor of Hebrew in 1861-2. For some time he held a Baptist ministerial charge at Fisherville, New Hampshire, and at Rochester. He was appointed Professor at Rochester in 1868. His hymn, "He leadeth me, O blessed thought" (Ps. xxiii.), is somewhat widely known. It was written at the close of a lecture in the First Baptist Church, Philadelphia, and is dated 1859. It is in the Baptist Hymnal [and Tune] Book, Philadelphia, 1871. [Rev. F. M. Bird, M. A.]