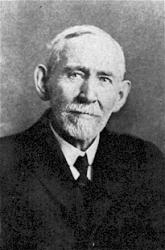 Rv Frederick Arthur Graves USA 1856-1927. Born at Williamstown, MA, he was raised in a Christian family, but was orphaned at age 9 after the death of his father, a taylor, then three years later his mother (tuberculosis), he lived on a farm with a family names Hollis that worked him hard and treated him poorly. He was diagnosed with epilepsy when 14. At 21 he moved to Nobles County, MN, and it seemed that his seizures had stopped. Grateful for that, he served the American Sunday School Union as an organizer and evangelist. He was musical, and after age 35 wrote 43 songs. He, with wife Vina, raised three children, Arthur, Irene, and Carl. He studied Bible and music in Chicago, IL and Northfield, MA. Returning to Minneapolis and hearing evangelist John A Dowie, he experienced permanent healing, which provided a backdrop for his gospel songs. He was ordained an Assemblies of God minister in 1916. Later, he moved to Zion Hill,IL, where he lived the rest of his life. He died at Zion City, IL. Nearly 1000 people attended his funeral there.