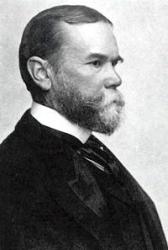 Hay, John, diplomat and author, born at Salem, Ind., Oct. 8, 1838; graduated at Brown University 1858; admitted to the 111. Bar; was private secretary to Pres. Lincoln; served in the Civil War; member of the Legation at Paris, Madrid, and Vienna, and Ambassador at the Court of St. James. In 1879-81 he was First Assistant Sec. of State, and from 1898 Sec. of State in the Cabinets of Presidents McKinley and Roosevelt, to his death July 1, 1905. His publications included Castilian Days, 1871; and, with J. G. Nicolay, Abraham Lincoln: A History, 10 vols., 1887, &c. In 1871 he also published Pike County Ballads, and in 1890 Poems. Of his poems the following are in common use as hymns:—
1. From Sinai's cloud of darkness. [Law and the Gospel.] This begins with st. ii. of his poem, “Sinai and Calvary," in Poems, 1890, p. 152. Asked for its date and origin, Mr. Hay said: "I wrote the hymn several years ago, because I felt like it. I can say nothing more intelligible than that." It was included iu the New Laudes Domini, N.Y., 1892.
2. Lord, from far-severed climes we come. [Work on for God.] In the summer of 1895, at his summer home at Lake Sunapee, Mr. Hay was asked to write a hymn for the opening of the 15th International Christian Endeavour Convention, at Washington, the following year, but declined on the ground that his verse-writing days were past. But in the following spring he sent this hymn, with the statement that there was no obligation to use it. In his manuscript it is entitled "An Invocation." It was sung at the opening of the Convention of 1896, and again at the Convention on July 4, 1905, when the opening exercises assumed the form of a memorial service, as his body was being borne to the grave. It is in several American collections. In The Methodist Hymnal, N.Y., 1905, it opens with st. ii., “Defend us, Lord, from every ill." The original is in 4 stanzas of 4 lines.
3. Not in dumb resignation. [Submission.] Appeared in 3 stanzas of 8 lines in Harper's New Monthly Magazine, Oct. 1891, and entitled "Thy will be done." Given with alterations in Dr. L. Abbott's Plymouth Hymnal, N.Y., 1894.
Mr. Hay was for some time an office-bearer in the Presbyterian Church of the Covenant, Washington, D.C. [Rev. L. F. Benson, D.D.]