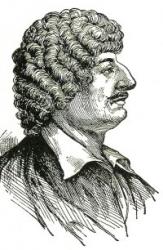 Herrick, Robert, son of Nicholas Herrick, goldsmith in Cheapside, London, was born in London in 1591, and educated at St. John's College, and Trinity Hall, Cambridge. Taking Holy Orders in 1629, he was presented to the living of Dean-Prior, Devon. During Cromwell's Government he was ejected, but was reinstated at the Restoration. He died in 1674. His Noble Numbers was published in 1647; and his Hesperides, or the Works bothe Humane and Divine, of Robert Herrick, in 1648. Various editions have followed, including that by Dr. Grosart, in 3 vols., in his Early English Poets, 1869. A Selection, with Memoir by Dr. Nott, was also published at Bristol, 1810; and another Selection, by F. T. Palgrave, in the Golden Treasury Series, 1877. Herrick's Hesperides is also one of the Universal Library Series, edited by H. Morley, 1884.

Robert Herrick (baptised 24 August 1591 – buried 15 October 1674) was a 17th-century English lyric poet and cleric. He is best known for Hesperides, a book of poems. This includes the carpe diem poem "To the Virgins, to Make Much of Time", with the first line "Gather ye rosebuds while ye may".
Wikipedia Biography
TextsTunesHymnals