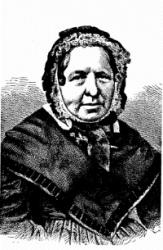 Heusser-Schweizer, Meta, daughter of Diethelm Schweizer, pastor of the Reformed Church at Hirzel near Zurich, was born at Hirzel, April 6, 1797, and was married in 1821, to Johann Jakob Heusser, a physician at Hirzel. Dr. Heusser died at Hirzel in 1859, and his widow continued to reside there till her death on January 2, 1876 (Koch, vii. 377-381; Allgemeine Deutsche Biographie, xii. 339, 340).

She was of a true poetic genius, and may fairly be regarded as the most important of modern German female sacred poets. The Holy Scriptures and the mountain scenery of her lonely home were the chief sources of her poetic inspiration. She was trained in the school of affliction, and her poems breathe the spirit of deep and sincere piety and childlike dependence, are free from all affectation, and speak from the heart to the heart. Her poems first appeared at intervals in Albert Knapp's Christoterpe. The first series of them were published at Leipzig in 1858 as Lieder einer Verborgenen; reprinted with her name as her Gedichte at Leipzig, 1863. A second series was published at Leipzig in 1867. A large number of her hymns are found in Knapp's Evangelischer Lieder-Schatz, 1850 and 1865; and in the Deutsches Gesang-Buch, 1860, of her friend Dr. Schaff, afterwards adopted as the official book of the American Reformed Church. A full selection of her poems was translated by Miss Jane Borthwick, and was published by Nelson in 1875 as Alpine Lyrics, and included as part of the new edition of Hymns from the Land of Luther, 1884. The dates of composition, unless otherwise stated, have been kindly supplied by her daughter, Fraulein Ega Heusser.