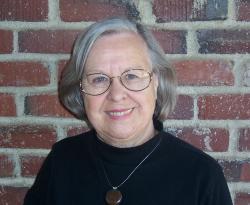 Jean Janzen was born on December 5, 1933, the seventh of Henry Peter Wiebe and Anna Schultz Wiebe's eventual eight children (Three Mennonite Poets 5). For the first five years of her life, Janzen lived in Dalmeny, Saskatchewan (A Cappella 25). In 1938, she moved to Mountain Lake, Minnesota when her schoolteacher father began his second ministry as a pastor (“Coming into Voice”). A year later, the family moved to Kansas (“Coming into Voice”).

Janzen says she cannot remember when she wrote her first poem, but the first evidence of her work is a handwritten book of five poems that she made in third or fourth grade, which was saved by her mother through the family’s many moves (E-mail Interview). She had very little exposure to poetry and literature as a child, except for hymns and Bible stories. She values these elements of her childhood and “treasure[s] the artful rhythms of the King James [Bible]” (E-mail Interview).

Janzen attended Meade Bible Academy, Tabor College, and Grace College (A Cappella 25). It was in college that she had her first real exposure to literature. She was “thrilled, and became a literature major.” She remembers being “enamored” with Emily Dickinson and writing papers about her whenever given the chance. However, she never considered writing poetry as a possible career (E-mail Interview).

Janzen--then Jean Wiebe--married Louis Janzen, a medical student, and the couple moved to Chicago where she worked as a medical secretary while taking courses at Northwestern University (Hostetler, A Cappella 25). Janzen cites this period of her life as the beginning of her love for visual art, calling the Chicago Art Institute the “open gate” for her and her husband where they “became hooked” (Mennonite Life Interview). In 1961, they moved to Fresno, Cal., where Louis worked as a pediatrician in a private practice. Here they raised their two daughters and two sons.

When her youngest child was in school, Janzen “joined a writer’s group at the encouragement of [her] husband and nephew after they read some poems [she] had written as a gift to [her] husband” (E-mail Interview). As her children became older, Janzen went back to college, earning a BA in English from Fresno Pacific College and an MA in Creative Writing and English from California State University at Fresno in 1982. There she studied with poets Peter Everwine, Philip Levine, and C.G. Hanzlicek. Janzen says that after one semester of writing poetry in college, she took the work “seriously” and “imagined the possibility of growing into a poet,” but it took her several years “to be willing to say that out loud” (E-mail Interview).

Rudy Wiebe, a Mennonite novelist, served as a mentor who influenced Janzen's writing career. She received a grant from the National Endowment for the Arts in 1995 (“Coming into Voice”). Janzen grew up in the Evangelical Mennonite Brethren Church and many of her relatives, including her father, were pastors (“Coming into Voice”). This strong connection with the church has had a significant influence on her poetry.

Music has also played an important role in Janzen’s life. Her mother loved music and music was an important part of worship in her church. She learned to play the piano when she was young, later studying music in college and teaching piano for many years (“Coming into Voice”). Janzen finds harmony between the religious and artistic elements of her life, integrating them in a way that enriches both. She also uses her gifts in the church, serving as a minister of worship at the College Community Mennonite Brethren Church in Clovis, Cal., as well as writing hymn texts, which have been set to music and are included in several hymn books.

Other prominent themes in her work include art, history, family, the earth, and her Russian Mennonite ancestors (“Coming into Voice”). Janzen says that “the sensual and spiritual are inevitably intertwined” (Mennonite Life Interview) and it is this element of her work that has attracted the most attention from critics and readers. She emphasizes “the presence of spirit in the flesh,” using rich description of physical objects to reveal deeper emotions and truths. Janzen has taught poetry writing at Fresno Pacific University and Eastern Mennonite University in Virginia.