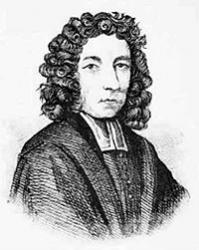 Keach, Benjamin, was born at Stoke-Hammond, Bucks, Feb. 29, 1640. Early in life he joined a Baptist Church, and at 18 began to preach. For the next 10 years he laboured as an evangelist in the towns and villages of his native county, suffering at times much persecution for his principles as a Baptist and Nonconformist. In 1661, he published a small book entitled The Child's Instructor; or, a New and Easy Primer. For this he was tried before Lord Chief Justice Hyde, and condemned to a fine, imprisonment and the pillory. In 1668 he removed to London, and became pastor of a Particular Baptist Church which met, first in private houses, and afterwards in Horselydown, Southward. There a large congregation gathered round him, to which he ministered with great acceptance and usefulness until his death in 1704. Keach deserves special mention for the part he took in introducing singing into Baptist congregations, having been the first who did so. He wrote many hymns, the earliest appearing in his War with the Powers of Darkness, 4th ed., 1676. Nearly 300 by him were pub. in 1691 as Spiritual Melody, their subjects being the Metaphors of Holy Scripture. This subject had been previously expounded by him in his Tropologia, a Key to open Scripture Metaphors, 2 vols. folio, 1682. His Distressed Sion Relieved, or The Garment of Praise for the Spirit of Heaviness, was published in London, 1689. It is mainly in blank verse, is dedicated to William and Mary, and is written in praise of Protestantism against Romanism. In 1691 he also published God's Worship; or Singing of Psalms, Hymns & Spiritual Songs proved to be a Holy Ordinance The Breach Repaired in of Jesus Christ, &c. (London, J. Hancock): and also Spiritual Melody the same year. His latest poetical work appeared in 1696: A Feast of Fat Things: containing several Scripture Songs and Hymns. Keach was a voluminous writer, forty-two works being published by him, in addition to prefaces and introductions to the books of others. His hymns have passed out of common use. [Rev. W. R. Stevenson]

Benjamin Keach (29 February 1640 – 18 July 1704) was a Particular Baptist preacher in London whose name was given to Keach's Catechism.
Wikipedia Biography
TextsTunesHymnals