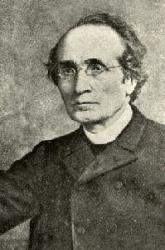 March, D., p. 1578, ii. The following details concerning Dr. March's hymn, "Hark ! the voice of Jesus crying," have been furnished us by himself:—

"It was written at the impulse of the moment to follow a sermon I was to preach in Clinton St. Church to the Philadelphia Christian Association on the text Is. vi. 8. That was some time in 1868."

The original text in full is in The Hymnal, (Presb.), Phila., 1895, No. 361. Dr. March declines to accept the interpolations which have been made in this hymn. We must note also that the incident given in Brownlie's Hymns and Hymnwriters of the Church Hymnary (Scottish), p. 303, relative to this hymn and President Lincoln, is incorrect. It relates to Mrs. E. Gates's " If you cannot on the ocean," p. 1565, i. 5. [Rev. L. F. Benson, D.D.]