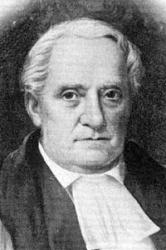 Henry Ustick Onderdonk, Bishop of Pennsylvania, was born in New York, March 16, 1789, and educated at Columbia College, B.A. 1805, M.A. 1808, D.D. 1827. Having decided to devote his life to medicine, he studied first in London and then in Edinburgh, receiving his M.D. from that university in 1810. Returning to New York, he began to study theology under Bishop Hobart and was ordained in 1815. He was rector of St. Ann's, Brooklyn, until 1827 when, following a famous controversy, he was elected bishop coadjutor of Pennsylvania, becoming diocesan in 1836 upon the death of Bishop White. He, with W.A. Muhlenberg, q.v., was influential on the committee appointed by General Convention to prepare the so-called Prayer Book Collection, 1826. The two men were also instrumental in the publication of the volume known as Plain Music for the Book of Common Prayer, in 1854. These books served until the Hymnal of 1874. Although some metrical psalms were included in the Prayer Book Collection, the book marked the change in America from psalmody to hymnody. Onderdonk contributed nine hymns, of which only one survives. He also wrote several works on the episcopacy. His weakness for alcohol necessitated his resignation in 1844, but his life from then on was so exemplary that he was restored to his bishopric two years before his death, which occurred in Philadelphia on December 6, 1858.
--The Hymnal 1940 Companion

Onderdonk, Henry Ustic, D.D., was born in New York, March 16, 1789, and educated at Columbia College. Taking Holy Orders, he was for some time Rector of St. Ann's Church, Brooklyn, New York. On the 27th Oct., 1827, he was consecrated at Philadelphia, and acted as Assistant Bishop of Philadelphia to Bishop White from that date to 1836, when upon the death of Bishop White, he entered upon the full charge of the diocese. He was suspended by the House of Bishops on the ground of intemperance in 1844, but restored in 1856. He died in Philadelphia, Dec. 6th, 1858. Without Bishop Doane's commanding talents, he yet rendered large and useful service to hymnody as author and compiler. He was a member (and apparently a leading one) of the Committee which compiled the American Prayer Book Collection of 1826 and was by far the largest contributor thereto. Apart from hymnwriting, so far as we know, he wrote nothing in verse.

His original hymns contributed to the Prayer Book Collection, 1826, are:—
1. Although the vine its fruit deny. Confidence in God. A paraphrase of Hab. iii. 17-19.
2. Blest be Thou, the God of Israel. Praise. A paraphrase of 1 Chron. xxix. 10-13.
3. How wondrous and great. Missions. A paraphrase of Rev. xv. 3, 4, being the Song of Moses and of the Lamb.
4. On Zion, and on Lebanon. Missions. Based on the text, Is. xxxv. 2.
5. Seek, my soul, the narrow gate. The Narrow Way. A paraphrase of St. Luke xiii. 24-27.
6. Sinner, rouse thee from thy sleep. Exhortation to awake out of sin. Based upon Eph. v. 14-17.
7. The Spirit in our hearts. Invitation. Based upon Rev. xxii. 17-20. This hymn may possibly have been suggested by Dr. Gibbons's "The Spirit in the word," which appeared in Hymns adapted to Divine Worship, 1769, p. 149. Bishop Onderdonk's hymn is in extensive use. Sometimes it is given as "The Spirit to our hearts."
8. Though I should seek to wash me clean. Need of the Mediator. This is not only used in full, but sts. iii.— v. are also used separately as "Ah, not like erring man is God."
9. When, Lord, to this our western land. Missions. This, and No. 4, were given in the Prayer Book Collection. "For Missions to the new Settlements in the United States."

In addition to these original hymns, Onderdonk contributed to the same collection the following adaptations from others:—
10. Ah, how shall fallen man? Redemption, This is I. Watts's "How should the sons of Adam's race?" (p. 539. i.), rewritten from the form given to it in the Scottish Translations and Paraphrases, 1781.
11. Heirs of unending life. Trust in God. Of this st. i. is by Onderdonk, and st. ii. and iii. are altered from Beddome's hymn "That we might walk with God." Sometimes given as "Heirs of immortal life."
12. The gentle Saviour calls. Christ accepting Children. This is altered from Doddridge's "See Israel's gentle Shepherd stand." It is sometimes given as "The Saviour kindly calls." [Rev. F. M. Bird, M.A.]