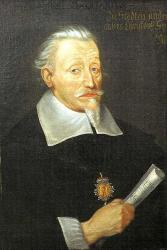 Heinrich Schütz (baptized Oct. 9, 1585-1672) was the greatest German composer of the seventeenth century and the first to reach international prominence. His influence was felt for more than two centuries after his death.
In 1598, after hearing the young Henrich sing, the Landgrave Moritz of Hessen-Kassel began a campaign to have the boy study at Kassel. In 1599, Christoph Schütz took his son to the landgrave’s seat, where he served as a choirboy and pursued his education showing particular facility in Greek, Latin, and Frence. After he lost his treble voice, he set out for the University of Marburg, where he studied law. But under the sponsorship of the landgrave, Heinrich went to Venice (1609) and studied with Giovanni Gabrieli until Gabrieli’s death in 1612. In 1613 he returned to Germany, once again studying law while serving as organist to the landgrave. He was lent to Johann Georg I of Saxony (1614) and subsequently became director of the chapel, a position he held the rest of his life. The untimely death of his wife after six years of marriage (1625) led him to devote himself to the composition of church music. After several petitions Schütz was granted leave to study with Claudio Monteverdi and once again set out for Venice. For much of his life the Thirty Years’ War obstructed his work, and he spent time moving from court to court in Europe, finally settling in Dresden in 1641, where he died.

Heinrich Schütz (German: [ʃʏt͡s]; 18 October [O.S. 8 October] 1585 – 6 November 1672) was a German composer and organist, generally regarded as the most important German composer before Johann Sebastian Bach, as well as one of the most important composers of the 17th century. He is credited with bringing the Italian style to Germany and continuing its evolution from the Renaissance into the Early Baroque. Most of his surviving music was written for the Lutheran church, primarily for the Electoral Chapel in Dresden. He wrote what is traditionally considered to be the first German opera, Dafne, performed at Torgau in 1627, the music of which has since been lost, along with nearly all of his ceremonial and theatrical scores.
Wikipedia Biography
TextsTunesHymnals