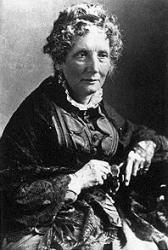 Stowe, Harriet, née Beecher, daughter of the Rev. Lyman Beecher, D.D., was born at Litchfield, Connecticut, June 15, 1812. In 1832, her father having been appointed President of Lane Seminary, Cincinnati, Ohio, she removed therewith the family; and in 1833 was married to the Rev. Calvin E. Stowe, D.D., Professor of Languages and Biblical Literature in the same Institution. Her high reputation as an author is well known; and the immense success of Uncle Tom's Cabin, which first appeared in The National Era, in 1852, ensures her a lasting reputation. She has also written other well-known works. Three of her hymns appeared in the Plymouth Collection, edited by her brother, H. W. Beecher, in 1855:—
1. Still, still with Thee, when purple morning breaketh. Resting in God.
2. That mystic word of Thine, 0 sovereign Lord. Abiding in Jesus.
3. When winds are raging o'er the upper ocean. Peace.
Another hymn by Mrs. Stowe, "How beautiful, said he of old" (The Gospel Ministry), is No. 231 in the Boston Hymns of the Spirit, 1864. Her poetic pieces were published in her Religious Poems, 1867; and from a poem therein the hymn, "Knocking, knocking, who is there?" (Christ knocking), in Sankey's Sacred Songs and Solos is adapted. [Rev. F. M. Bird, M.A.]

Harriet Elisabeth Beecher Stowe (; June 14, 1811 – July 1, 1896) was an American abolitionist and author. She came from the Beecher family, a famous religious family, and is best known for her novel Uncle Tom's Cabin (1852), which depicts the harsh conditions for enslaved African Americans. The book reached millions as a novel and play, and became influential in the United States and Great Britain, energizing anti-slavery forces in the American North, while provoking widespread anger in the South. Stowe wrote 30 books, including novels, three travel memoirs, and collections of articles and letters. She was influential for both her writings and her public stances and debates on social issues of the day.
Wikipedia Biography
TextsTunesHymnals