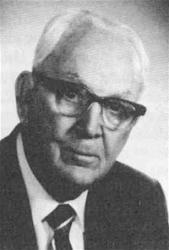 Tillit Sidney Teddlie was born on June 3, 1885 at Swan, Texas. He was a leader in the Churches of Christ denomination in the 20th Century. In addition to singing schools which he taught for 61 years, he also preached and taught across Texas and the southwest. For one period of time (two years) he sang only with Foy E. Wallace, Jr., (a well-known, conservative Churches of Christ preacher around World War II) while they conducted meetings across the country.

Teddlie was honored by many people in many places. On June 2, 1985, 630 churches across the land proclaimed Sunday “Tillit S. Teddlie Day” and sang his songs. Teddlie had composed 130 songs and published 14 song books. One of his song books, "Golden Harvest Hymns" included 100 of his best-known hymns. He attended a song fest in his name at the Preston Crest Church of Christ in Dallas where more than 1,200 gathered. Teddlie's 100th birthday was honored by President Reagan who sent a telegram, and Sen. Phil Graham among others. The Briar, Texas, Church of Christ gave him a bronze statue worth $6,000.

His songs published in hymnals from Churches of Christ include “Worthy Art Thou,” “Heaven Holds All to Me,” “When We Meet in Sweet Communion, “Oft We Come Together,” “Singing Redemption’s Song,” “Hear Me When I Call,” “O God of Infinite Mercy,” and many more. While Teddlie had success as a publisher of many of his own smaller hymnals, his contributions as a composer to every major hymnal published in Churches of Christ since 1921 have left an indelible imprint on the denomination’s hymnody.

Teddlie died August 17, 1987 at the age of 102. He is remembered for his preaching, teaching, and music and his good influence upon all the people that he met and worked with.

Tillit Sidney Teddlie (1885–1987) was a singing school teacher, composer, publisher, and minister of the Church of Christ. Teddlie was born June 3, 1885 at Swan, Texas (Smith County), the son of Theodore and Sarah Ann (Porter) Teddlie. In 1903, he was baptized into the Church of Christ, and also taught his first singing school, which lasted for two weeks. He composed his first song in 1906. Tillit S. Teddlie married Edna Webb. They had one son, Pete Teddlie.
Wikipedia Biography
TextsTunesHymnals