Hail, thou once despised Jesus!

There is a blessed hope

Author: Anon. Appears in 11 hymnals Lyrics: ... bright Than all the joyless mockery The world esteems delight. 2 ... Topics: The Christian Faith, Hope, and Charity Used With Tune: DENNIS
There is a blessed hope

If God Himself Be For Me

Author: Richard Massie; Paul Gerhardt Meter: 7.6.7.6 D Appears in 40 hymnals Lyrics: ... him the burden waits Of mockery, shame, and losses. Heaped on ... Topics: Cross and Comfort Scripture: Romans 8:31-39 Used With Tune: VALET WILL ICH DIR GEBEN Text Sources: Tr. based on Richard Massie, 1857
If God Himself Be For Me 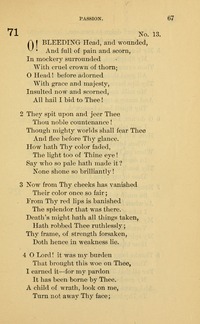 O woeful hour! when from the night 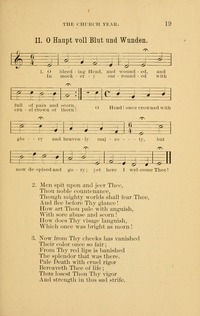 1809 - 1847 Composer of "MUNICH" in The Seventh-Day Adventist Hymn and Tune Book Felix Mendelssohn-Bartholdy (b. Hamburg, Germany, 1809; d. Leipzig, Germany, 1847) was the son of banker Abraham Mendelssohn and the grandson of philosopher Moses Mendelssohn. His Jewish family became Christian and took the Bartholdy name (name of the estate of Mendelssohn's uncle) when baptized into the Lutheran church. The children all received an excellent musical education. Mendelssohn had his first public performance at the age of nine and by the age of sixteen had written several symphonies. Profoundly influenced by J. S. Bach's music, he conducted a performance of the St. Matthew Passion in 1829 (at age 20!) – the first performance since Bach's death, thus reintroducing Bach to the world. Mendelssohn organized the Domchor in Berlin and founded the Leipzig Conservatory of Music in 1843. Traveling widely, he not only became familiar with various styles of music but also became well known himself in countries other than Germany, especially in England. He left a rich treasury of music: organ and piano works, overtures and incidental music, oratorios (including St. Paul or Elijah and choral works, and symphonies. He harmonized a number of hymn tunes himself, but hymnbook editors also arranged some of his other tunes into hymn tunes. Bert Polman
Felix Mendelssohn-Bartholdy