Author: Charles A. Tindley Appears in 5 hymnals Hymnal Title: Calvin Hymnary Project First Line: The world of forms and changes Refrain First Line: After a while, after a while
After Awhile

[The world of forms and changes]

[This world of forms and changes]

Composer: J. B. Vaughan Appears in 1 hymnal Hymnal Title: Millennial Revival Used With Text: After While
[This world of forms and changes]

The world of forms and changes (After awhile) 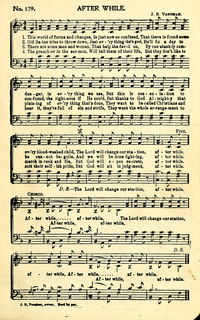 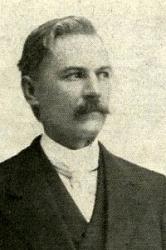 1851 - 1933 Person Name: C.A. Tindley Hymnal Title: Soul Echoes Author of "After a While" in Soul Echoes Charles Albert Tindley was born in Berlin, Maryland, July 7, 1851; son of Charles and Hester Tindley. His father was a slave, and his mother was free. Hester died when he was very young; he was taken in my his mother’s sister Caroline Miller Robbins in order to keep his freedom. It seems that he was expected to work to help the family. In his Book of Sermons (1932), he speaks of being “hired out” as a young boy, “wherever father could place me.” He married Daisy Henry when he was seventeen. Together they had eight children, some of whom would later assist him with the publication of his hymns. Tindley was largely self-taught throughout his lifetime. He learned to read mostly on his own. After he and Daisy moved to Philadelphia in 1875, he took correspondence courses toward becoming a Methodist minister. He did this while working as a sexton (building caretaker) for the East Bainbridge Street Church. Beginning in 1885, he was appointed by the local bishop to serve two or three-year terms at a series of churches, until coming full circle to become pastor at East Bainbridge in 1902. Under his leadership, the church grew rapidly. They relocated in 1904 to the East Calvary Methodist Episcopal Church, then again in 1924 to the new Tindley Temple, where the membership roll blossomed to about ten thousand. Tindley was known for being a captivating preacher, and for also taking an active role in the betterment of the people in his community. His songs were an outgrowth of his preaching ministry, often introduced during his sermons. Tindley was able to draw people of multiple races to his church ministry; likewise, his songs have been adopted and proliferated by white and black churches alike. The songs of Charles Tindley were published cumulatively in two editions of Soul Echoes (1905, 1909) and six editions of New Songs of Paradise (1916-1941). His wife Daisy died in 1924, before the completion of the Tindley Temple. He remarried in 1927 to Jenny Cotton. Charles A. Tindley died July 26, 1933.
Charles Albert Tindley