Abide with Us, Our Savior 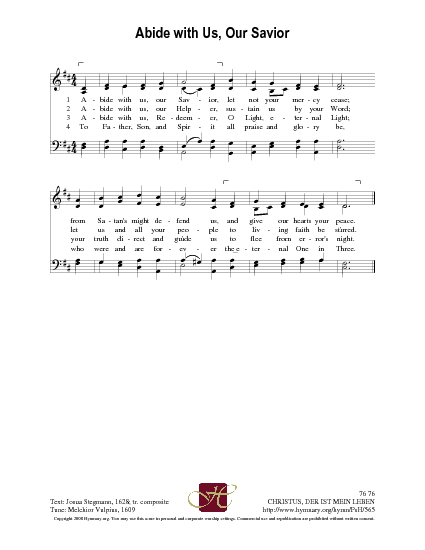 Abide with us, our Savior, Nor let Thy mercy cease

1 Abide with us, our Savior,
let not your mercy cease;
from Satan's might defend us,
and give our hearts your peace.


2 Abide with us, our Helper,
sustain us by your Word;
let us and all your people
to living faith be stirred.


3 Abide with us, Redeemer,
O Light, eternal Light;
your truth direct and guide us
to flee from error's night.


4 To Father, Son, and Spirit
all praise and glory be,
who were and are forever
the eternal One in Three.

Stegmann, Josua, D.D., son of Ambrosius Stegmann, Lutheran pastor at Sülzfeld, near Meiningen, and finally, in 1593, superintendent at Eckartsberga, near Merseburg, was born at Sülzfeld, Sept. 14,1588. He entered the University of Leipzig in 1608, M.A. in 1611, and was for sometime adjunct of the Philosophical Faculty. In 1617 he was appointed Superintendent of the district (Grafschaft) of Schaumburg, and also pastor at Stadthagen, and first professor of the Gymnasium there; and before entering on his duties graduated D.D. at Wittenberg, on Oct. 24, 1617. When the Gymnasium was erected into a university, and transferred (1621) to Rinteln, he became ordinary professor of Theology there. By the outbreak of war he was forced to flee from Rin… Go to person page >
^ top

The English translation of the first two stanzas is an anonymous translation found in the Lutheran Church Book (Philadelphia, 1868). The third stanza is derived from a translation by August Crull, whose hymn texts were published in various nineteenth century Lutheran hymnals in the United States.

The opening phrases in stanzas 1-3 ("Abide with us") recall the Emmaus travelers (Luke 24:29). The text is a prayer for guidance on our life's journey and for obedience to God's Word, particularly in the face of Satan's temptations.

Josua Stegmann (b. Sulzfeld, near Meiningen, Germany, 1588; d. Rinteln, Germany, 1632) was a brilliant scholar and church administrator whose life was greatly troubled by the political and religious disturbances of his time. Educated at the University of Leipzig, he became a pastor in the Lutheran church in Stadthagen and a teacher at the gymnasium (high school) there in 1617. When the gymnasium became a university and moved to Rinteln, Stegmann was appointed professor of theology, but he fled the town in 1623 because of local battles in the Thirty Years' War. He returned to Rinteln in 1625, but his career was interrupted by the Edict of Restitution (1629), which ordered that all church estates (secularized in 1552) be returned to the Roman Catholic Church. The local Benedictine monks claimed possession of the university and the lands, which had been used to pay the professors' salaries. Stegmann was also harassed by soldiers coming to his home to claim a refund on his salary. Soon after these incidents he succumbed to illness and died in 1632. His devotional writings include verse written in Latin and a few hymn texts written in German.

Liturgical Use:
As a sung prayer for illumination before the Service of the Word; for evening services; the close of worship; Old/New Year services and other times when embarking on new ventures in the church's ministries.

Melchior Vulpius (PHH 397) composed this short chorale tune, published as a setting for the anonymous funeral hymn "Christus, der ist mein Leben" ("For Me to Live Is Jesus") in Vulpius's Ein Schön Geistlich Gesangbuch (1609). Johann S. Bach (PHH 7) based his Cantata 95 on this tune and provided two…

All tunes published with 'Abide with Us, Our Savior'^ top 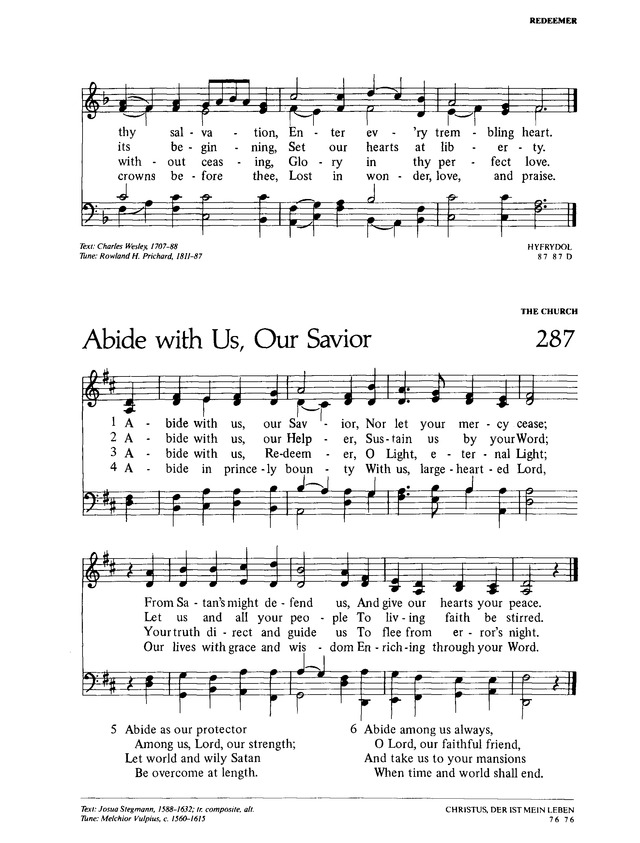