An Infant Lay Within a Shed 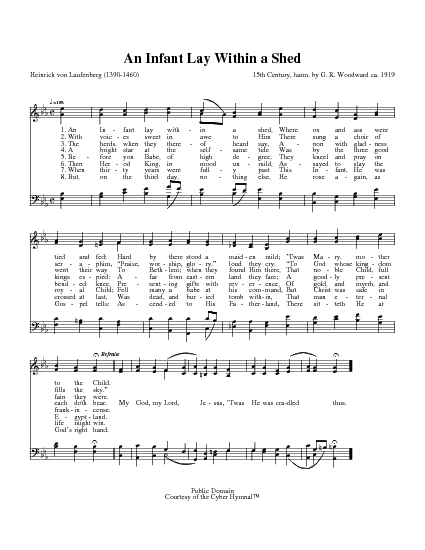 An Infant lay within a shed

1. An Infant lay within a shed,
Where ox and ass were tied and fed;
Hard by there stood a maiden mild;
’Twas Mary, mother to the child.


Refrain
My God, my Lord, Jesus,
’Twas He was cradled thus.


2. With voices sweet in awe to Him
There sung a choir of seraphim,
Praise, worship, glory, loud they cry,
To God whose kingdom fills the sky. [Refrain]


3. The herds, when they thereof heard say,
Anon with gladness went their way
To Bethlem; when they found Him there,
That noble child, full fain they were. [Refrain]


4. A bright star at the self-same tide
Was by the three good kings espied:
Afar from eastern land they fare;
A goodly present each doth bear. [Refrain


5. Before yon babe, of high degree,
They kneel and pray on bended knee,
Presenting gifts with reverence,
Of gold, and myrrh, and frankincense. [Refrain]


6. Then Herod King, in mood unmild,
Assayed to slay the royal child;
Fell many a babe at his command,
But Christ was safe in Egypt-land. [Refrain]


7. When thirty years were fully past
This infant, He was crossed at last,
Was dead, and buried tomb within,
That man eternal life might win. [Refrain]


8. But, on the third day, nothing else,
He rose again, as Gospel tells:
Ascended to His Father-land,
There sitteth He at God’s right hand. [Refrain] 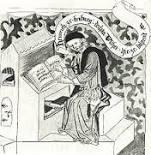 Heinrich of Laufenburg was a native of Laufenburg, Aargau, Switzerland, The earliest notice of him is that in 1434 he was decan of the Collegiate Church of St. Maurice at Zofingen in Aargau. He afterwards held a similar post at Freiburg, in Baden; but in 1445 became a monk in the monastery of the Knights of St. John at Strassburg ("Zum grunen Werde"). He was living there in 1458, but probably died in that year or soon after (Koch, i. 213-214; Allgemine Deutsche Biographie, xix. 810-813, &c). He was the most important and most prolific hymn-writer of the 15th century, and a number of his productions are of sweetness and abiding worth. Most of them are in honour of the Blessed Virgin Mary. Many are in intricate metres, while others are writt… Go to person page >

Educated at Caius College in Cambridge, England, George R. Woodward (b. Birkenhead, Cheshire, England, 1848; d. Highgate, London, England, 1934) was ordained in the Church of England in 1874. He served in six parishes in London, Norfolk, and Suffolk. He was a gifted linguist and translator of a large number of hymns from Greek, Latin, and German. But Woodward's theory of translation was a rigid one–he held that the translation ought to reproduce the meter and rhyme scheme of the original as well as its contents. This practice did not always produce singable hymns; his translations are therefore used more often today as valuable resources than as congregational hymns. With Charles Wood he published three series of The Cowley Carol Book (19… Go to person page >
^ top

[An Infant lay within a shed]

All tunes published with 'An Infant Lay Within a Shed'^ top