Johann Franck (b. Guben, Brandenburg, Germany, 1618; d. Guben, 1677) was a law student at the University of Köningsberg and practiced law during the Thirty Years' War. He held several positions in civil service, including councillor and mayor of Guben. A significant poet, second only to Paul Gerhardt in his day, Franck wrote some 110 hymns, many of which were published by his friend Johann Crüger in various editions of the Praxis Pietatis melica. All were included in the first part of Franck’s Teutsche Gedichte bestehend im geistliche Sion (1672). Bert Polman… Go to person page > 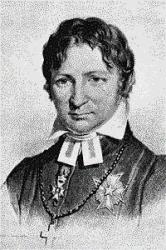