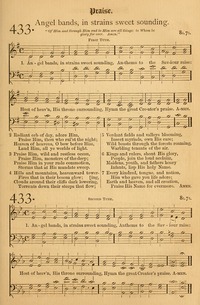 
2 Radiant orb of day, adore him,
Praise Him, thou who rul'st the night;
Heaven of heavens, O bow before Him,
Laud Him, all ye worlds of light.


3 Praise Him, wild and restless ocean
Praise Him, monsters of the deep;
Praise Him in your rude commotion,
Storms that at His mandate sweep.


4 Hills and mountains, heavenward towering,
Fires that in their bosom glow;
Clouds around their cliffs dark lowering,
Torrents down their steeps that flow;


5 Verdant fields and valleys blooming,
Insect myriads own His care;
Wild beasts through the forest roaming,
Warbling tenants of the air.


7 Every kindred, tongue, and nation,
Him Who gave you life adore;
Earth and heaven, and all creation,
Praise His Name for evermore.

De Wolf, John. Born at Bristol, Rhode Island, 1786, and educated at Brown University. Subsequently he was Professor of Chemistry in that University, from 1817 to about 1838. He also lectured in medical schools at St. Louis, and in Vermont. His later life was spent at Bristol, R. I., where he died in 1862. His version of Psalms 148, "Angel bands in strains sweet sounding," appeared in a Providence newspaper about 1815, and again in the Journal of that city in an obituary notice of the writer. It was but locally known till included in the Protestant Episc. Hymnal, 1871, by the author's relative, Bishop Howe, of Central Pennsylvania. [Rev. F. M. Bird, M.A.] -- John Julian, Dictionary of Hymnology (1907)  Go to person page >
^ top 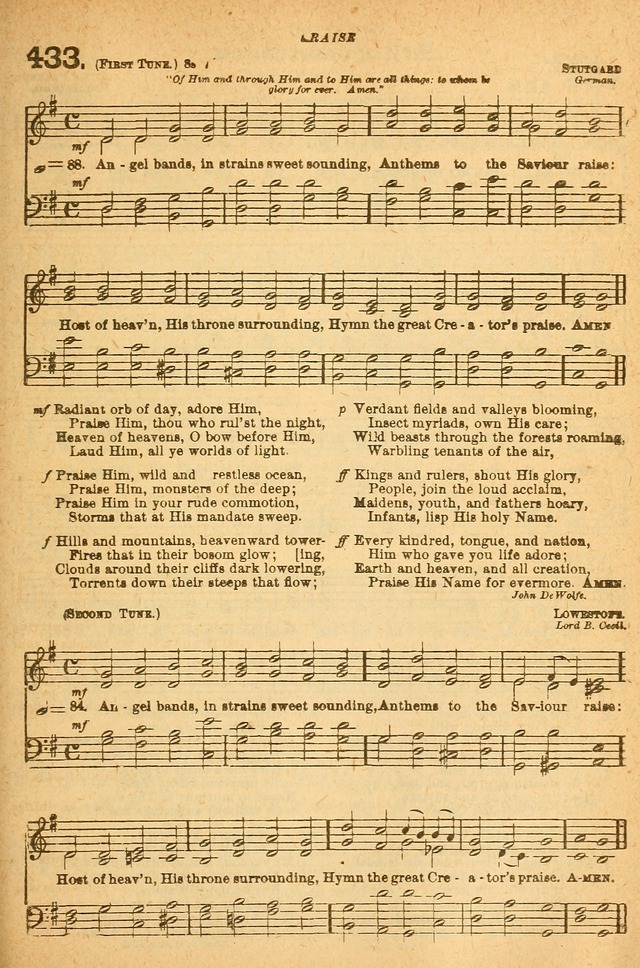 Prayer Book and Hymnal for the Sunday School #d6

The Church Hymnal with Canticles #433a

The Church Hymnal with Canticles #433b