Come, thou long expected Jesus,
born to set thy people free;
from our fears and sins release us,
let us find our rest in thee.
Israel's strength and consolation,
hope of all the earth thou art;
dear desire of every nation,
joy of every longing heart.

All texts published with STUTTGART^ top

STUTTGART was included in Psalmodia Sacra (1715), one of the most significant hymnals of the early sixteenth century [sic: eighteenth century]. Christian F. Witt (b. Altenburg, Germany, e. 1660; d. Altenburg, 1716) was an editor and compiler of that collection; about 100 (of the 774) tunes in that collection are considered to be composed by him, including STUTTGART, which was set to the text "Sollt' es gleich." Witt was chamber organist and later Kapellmeister at the Gotha court. He composed vocal and instrumental music, including some sixty-five cantatas. The tune title STUTTGART relates to a story about Rev. C. A. Dann's banishment from his pulpit at St. Leonard's Church in Stuttgart in the early nineteenth century. When Dann was eventually invited back to his church, his congregation greeted him with the singing of "Sollt' es gleich." Henry J. Gauntlett (PHH 104) put the tune into its present isorhythmic (all equal rhythms) form for Hymns Ancient and Modern (1861). A simple tune of two long lines and a number of repeated tones, STUTTGART has true congregational appeal. This tune has been traditionally used for "Come, Thou Long-Expected Jesus." Sing the hymn in harmony in a broad tempo. Or try singing stanza 3 unaccompanied and in parts, and stanza 4 in unison with alternate harmonization or with the descant (1983) by John Wilson (278). Use clear articulation on the organ with cheerful stops. --Psalter Hymnal Handbook, 1998
^ top

Text: Earth Has Many a Noble City

Text: Jesus, Thou Art Mine Forever

Text: Bethlehem In Land Of Judah 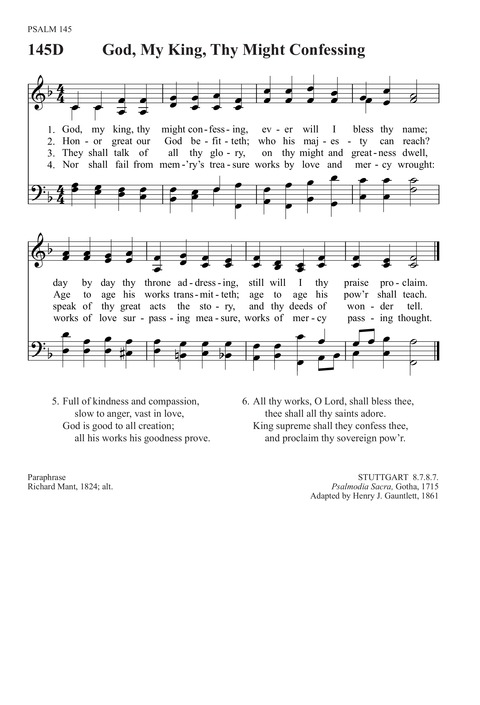 A New Hymnal for Colleges and Schools #212

Great Songs of the Church #17

Tune Title: STUTTGART First Line: May the grace of Christ our Savior Date: 1986
Great Songs of the Church #17

Hymns and Psalms #81a

Hymns for a Pilgrim People #89

The Book of Common Praise of the Reformed Episcopal Church #1

Include 122 pre-1979 instances
All instances^ top
Suggestions or corrections? Contact us