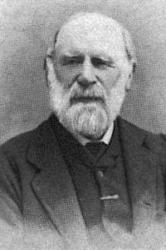 Midlane, Albert, was born at Newport, Isle of Wight, Jan. 23, 1825, and was engaged in business in that town for many years. To his Sunday school teacher he ascribes the honour of prompting him to poetic efforts: and the same teacher did much to shape his early life. His first printed hymn, "Hark! in the presence of our God," was written in September, 1842, at Carisbrooke Castle, and printed in the Youth’s Magazine in November of the same year. Since then he has written over 300, and of these a large proportion are in common use. They appeared in magazines and small mission hymn-books, including:— (1) The Youth's Magazine; (2) The British Messenger; (3) The London Messenger; (4) Trotter's Evangelical Hymn Book, 1860; (5) The Ambassador… Go to person page >