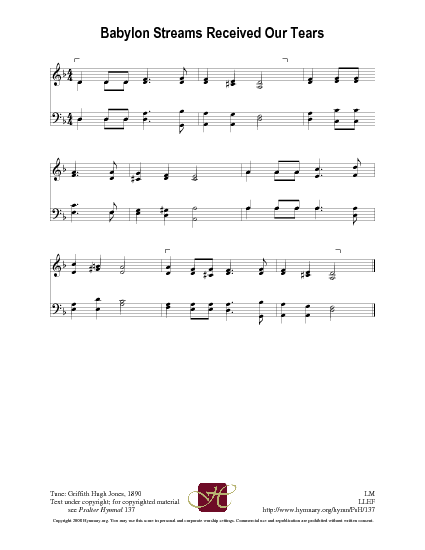 A profession of intense devotion to the city of the LORD by a people exiled and mocked in the land of their captors, who destroyed God’s city.

Israel speaks of its deep love of Zion, the city of God (see also 46, 48, 76, 84, 87, 122, and 125). The psalmist had probably only recently returned from exile in Babylon (other psalms from the exile period are 74 and 79). Lingering in his soul are bitter memories of the troubled years when Israel mourned over ruined Zion and suffered Babylon's taunts, weeping for the city of their God in songless grief (st. 1). When asked by their captors to entertain with songs of Zion, they could not comply, for that would have violated Zion's beloved memory (st. 2). They call down curses upon their ability to sing and play music if they neglect Zion as their chief joy (st. 3). Such devotion to the LORD's city cannot but commit its destroyers, Edom and Babylon, to God's avenging judgment (st. 4-5). The psalmist's words are harsh (v. 9) but do not go beyond judgments announced by the prophets against Edom and Babylon (Isa. 13: 16; Jer. 49:7-22; Jer. 50-51).

In 1982 Calvin Seerveld (PHH 22) versified this psalm for the Psalter Hymnal with an ABCA rhyme scheme, which is somewhat unusual in metrical psalmody.

Liturgical Use:
Introductory comments to remind worshipers of the intense devotion Israel had for Zion and of the agony the people suffered in exile among taunting enemies can be helpful before singing this psalm. Also noteworthy is the image of Babylon's destruction in the eschatological vision of Revelation 18-19.

Griffith Hugh Jones (b. Ty Du, Llanberis, Wales, 1849; d. Rhiwddolion, Wales, 1919) composed LLEF in memory of his brother, Rev. D. H. Jones, and the tune was first sung (prior to publication) at a Cymanfa, a Welsh song festival. LLEF was first published in David Jenkins's Gemau Mawl (1890). The hau…

All tunes published with 'Babylon Streams Received Our Tears'^ top