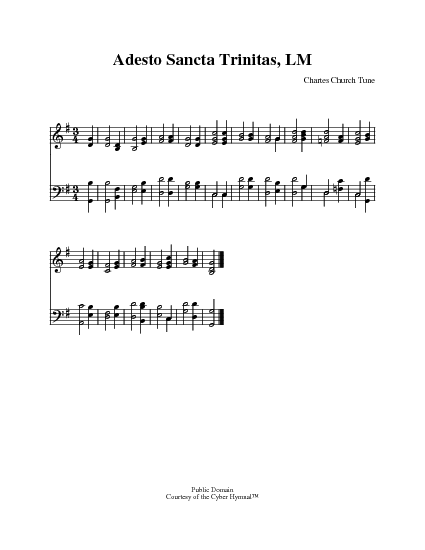 1. Be present, Holy Trinity,
Like splendor, and one Deity:
Of things above, and things below,
Beginning, that no end shall know.


2. Thee all the armies of the sky
Adore, and laud, and magnify;
And nature, in her triple frame,
Forever sanctifies Thy name.


3. And we, too, thanks and homage pay,
Thine own adoring flock today;
O join to that celestial song
The praises of our suppliant throng!


4. Light, sole and one, we Thee confess,
With triple praise we rightly bless;
Alpha and Omega we own,
With every spirit round Thy throne.


5. To Thee, O unbegotten One,
And Thee, O sole begotten Son,
And Thee, O Holy Ghost, we raise
Our equal and eternal praise.

Adesto sancta Trinitas. [Holy Trinity .] The authorship of this short hymn on the Holy Trinity is unknown. Its earliest form is in a manuscript of the 11th century, in the British Museum (Vesp. D. xii. f. 1156) printed in the Latin Hymns of the Anglo-Saxon Church, 1851, p. 161. Amongst the English Breviaries it is in those of York, Hereford, and Sarum; on the Continent, those of Mainz and Basel; and also in those of the Orders of the Carmelites, Dominicans, and Fratres Humiliati; but with varying texts. In Mone, i. p. 10, the text is given together with references to manuscripts, and notes on the text; the oldest manuscript dating from the 14th century. He also gives two refrains which are sometimes associated with the hymn. Daniel, i. No. 304, gives only the first four lines with a reference to Cassander; but in iv. p. 234, he gives the full text as in Mone, together with Mone's references. It is also in Neale's Hymni Ecclesia, 1851, p. 157; Hymnarium Sarisburiense. 1851, p. 115; the Domin. Hymn Book, &c. [Rev. W. A. Shouts, B.D.]
Translations in common use:—
1. Be present, Holy Trinity; Like Splendour, &c. By J. M. Neale. Appeared in the Hymnal Noted, 1852, No. 35, in 5 stanzas of 4 lines, and again in later editions. In 1867 it was repeated, unaltered, in the People's Hymnal, No. 161, and in the Hymnary, 1872, No. 337.

All tunes published with 'Be present, Holy Trinity'^ top 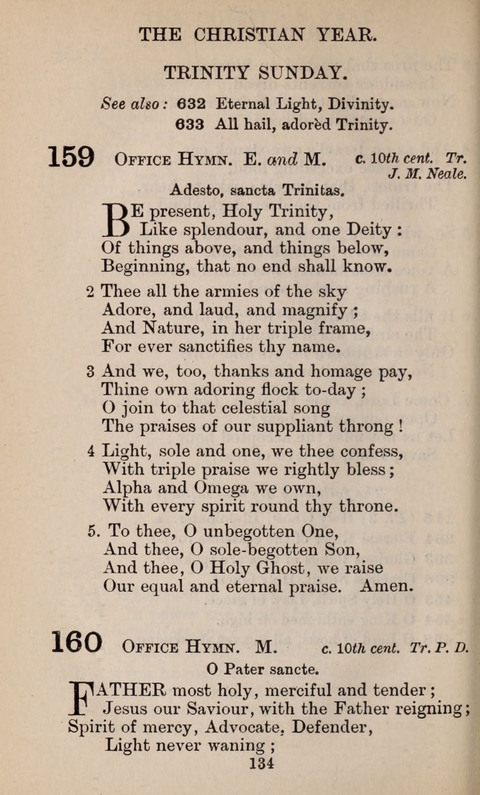