Beams of heaven, as I go

1 Beams of heaven, as I go,
Through this wilderness below,
Guide my feet in peaceful ways,
Turn my midnights into days;
When in the darkness I would grope,
Faith always sees a star of hope,
And soon from all life's grief and danger,
I shall be free some day.


Refrain:
I do not know how long 'twill be,
Nor what the future holds for me,
But this I know, if Jesus leads me,
I shall get home some day.


2 Oftentimes my sky is clear,
Joy abounds without a tear,
Though a day so bright begun,
Cloud's may hide tomorrow's sun.
There'll be a day that's always bright,
A day that never yields to night,
And in its light the streets of glory
I shall behold some day. [Refrain]


3 Harder yet may be the fight,
Right may often yield to might,
Wickedness awhile may reign,
Satan's cause may seem to gain.
There is a God that rules above,
With hand of pow'r and heart of love;
If I am right, He'll fight my battle,
I shall have peace some day. [Refrain]


4 Burdens now may crush me down,
Disappointments all around,
Troubles speak in mournful sigh,
Sorrow through a tear-stained eye;
There is a world where pleasure reigns,
No mourning soul shall roam its plains,
And to that land of peace and glory,
I want to go some day. [Refrain]

Source: One Lord, One Faith, One Baptism: an African American ecumenical hymnal #455

African American preacher Charles A. Tindley (b. Berlin, MD, 1851; d. Philadelphia, PA, 1933) was also a composer who wrote most of his church music for the East Calvary Methodist Episcopal Church, which he founded in Philadelphia. His church choir performed many gospel concerts.

Although probably written earlier in the century, Tindley's "Beams of Heaven" was published in 1916 in his New Songs of Paradise (copy available in the Library of Congress). Strongly apocalyptic, the text expresses the Christian's confidence that when “Jesus leads me, I shall get home someday.” That ultimate certainty gives hope and encouragement for our daily walk with God. Stanzas 1 and 2 use the rich Old Testament Exodus imagery of light and darkness to refer to times of joy and sorrow. The third stanza points from current troubles (see 2 Cor. 4:8-10) to the vision of a new creation, to "that land of peace and glory" (see Rev. 22:1-6).

The son of slave parents, Tindley taught himself to read and write and moved to Philadelphia, where he worked initially as a janitor for the John Wesley Methodist Church (later Calvary Methodist) and took correspondence courses from Boston University School of Theology. Ordained a Methodist pastor in 1885, he served several congregations in Delaware, Maryland, and New Jersey before returning in 1902 to Calvary Methodist in Philadelphia. Under his ministry the church thrived as a multi¬ethnic congregation. Tindley wrote the texts and tunes to forty-five gospel hymns, including "I'll Overcome Some Day" (1901), which became the inspiration for the well-known Civil Rights Movement theme song "We Shall Overcome."

Liturgical Use:
As a testimonial and visionary hymn about God's guidance of our lives from this world to eternity; also for funerals and other homecoming/going occasions.

Tindley's early twentieth-century gospel music is often considered to be the immediate forerunner of the rise of the African American gospel style associated with Thomas Dorsey (PHH 493). SOME DAY consists of a few melodic motives, which are varied in triple meter. The refrain melody is a repeat of…

All tunes published with 'Some Day'^ top 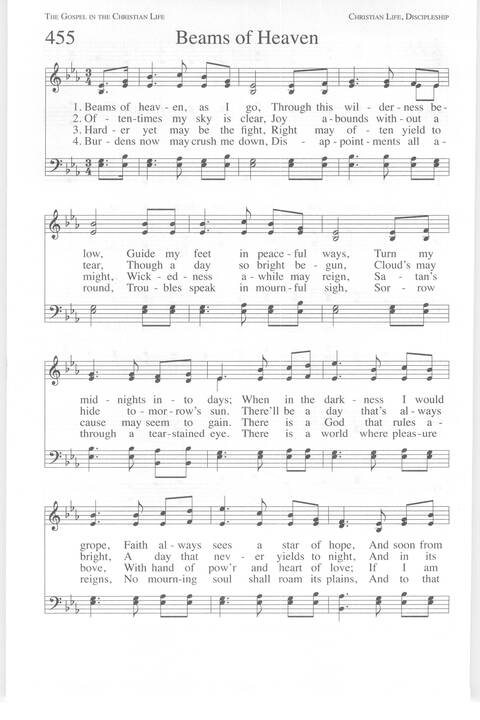