The Angels Are Singing 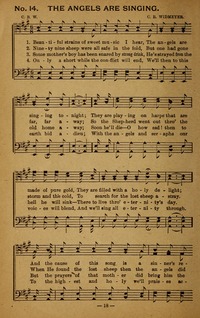 1 Beautiful strains of sweet music I hear,
The angels are singing tonight;
They are playing on harps that are made of pure gold,
They are filled with a holy delight;
And the cause of this song is a sinner's return,
From his wand'ring, his sin, and his strife.


Chorus:
O the angels are singing to me,
They tell of a captive made free;
A sinner's been saved and his name written down,
For a palace, a harp and a crown.


2 Ninety nine sheep were all safe in the fold,
But one had gone far, far away;
So the Shepherd went out thro' the storm and the cold,
To search for the lost sheep astray.
When He found the lost sheep then the angels did sing,
Till the arches of heaven did ring. [Chorus]


3 Some mother's boy has been snared by strong drink,
He's strayed from the old home away;
Soon he'll die—O how sad! then to hell he will sink—
There to live thro' eternity's day.
But the prayers of that mother did bring him the light,
And the angels are singing tonight. [Chorus]


4 Only a short while the conflict will end,
We'll then to this earth bid adieu;
With the angels and seraphs our voices will blend,
And we'll sing all eternity through.
To the highest and holy we'll praises acclaim,
For the saving from sin's dark domain. [Chorus]

Widmeyer, Charles B. (Berkeley Springs, West Virginia, 1884--California, December 14, 1974). Studied vocal music from age 12 under J.M. Cowgill; at age 15 began teaching classes of his own. First song was written at age 15. The first one published, "Upon the Cross," was written at age 20. Bachelor of Music degree from Bethany-Peniel, Bethany, Oklahoma. Wrote more than 350 songs; edited or contributed to many songbooks. "Come and Dine" was written following the reading of John 21:12 and his meditation on the similarity between the tired, hungry disciples and people of his day both spiritually and physically hungry; translated into Spanish, Japanese, Chinese, Arabic, and Serbian. --E. Roger Taylor, DNAH Archives Go to person page >
^ top

All tunes published with 'The Angels Are Singing'^ top 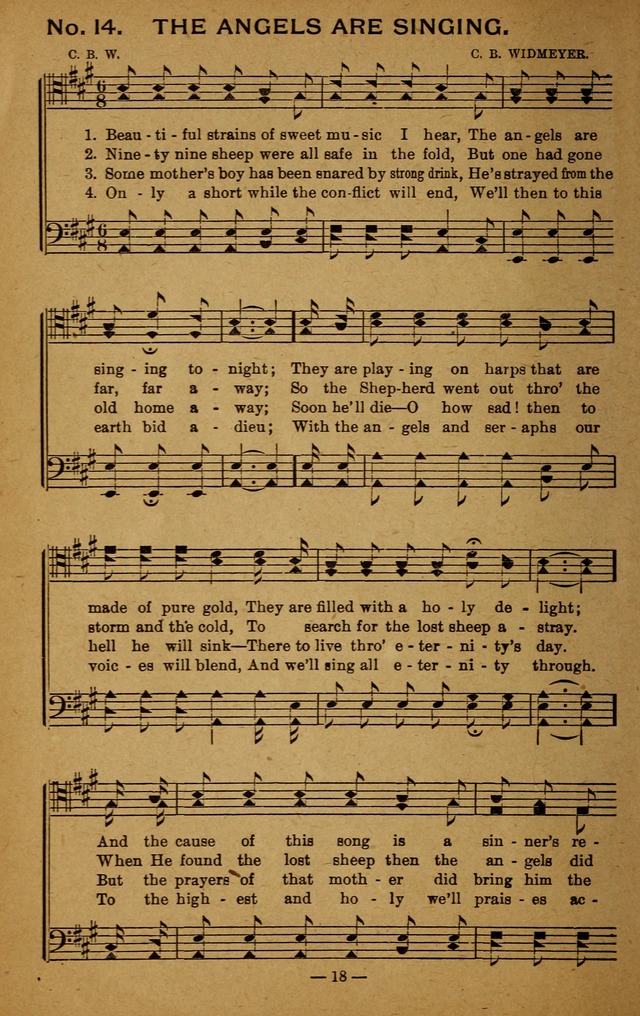